Masahiro Sakurai on getting Banjo-Kazooie and Hero into Smash Bros. Ultimate 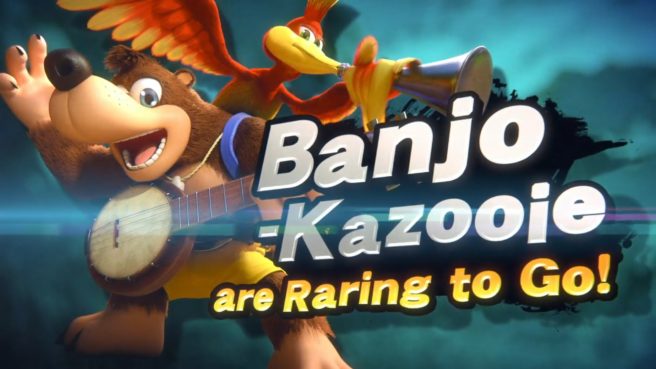 Smash Bros. Ultimate had two major announcements at E3 2019 earlier this month. Hero from Dragon Quest, alongside Banjo-Kazooie, will be added to the game as DLC characters. They’ll be available this summer and during the fall respectively.

In the magazine’s issue this week, director Masahiro Sakurai took to the latest issue of Famitsu and discussed the new announcements in greater depth. You can find our full translation below.

This column is a little late, so sorry to have kept you all waiting! “Hero” from the Dragon Quest series as well as “Banjo and Kazooie” from Banjo-Kazooie have both entered the fray for Super Smash Bros. Ultimate! These fighters are the 2nd and 3rd pieces of the game’s planned DLC; if you have the Fighter Pass, you can have fun playing as them alongside Persona 5’s Joker, as well as the eventual 4th and 5th DLC characters. There’s a looooooooot I want to cover, so I’ll go over the technical aspects of it all at a later time, for now I’d like to focus on the production side of things.

It’s hard to believe, but the day I get to work on Dragon Quest content has finally come… During production, I took the time to think about what I could do to make the fighter uniquely Dragon Quest – that resulted in including the traditional “Commands” from the games. I’d have a window appear, with the player being able to choose from spells and techniques that appear at random. For that, I co-opted the MP system.

The player can choose to fight as Hero from DQXI, III, IV, and VIII. Truth be told, up until now it was completely unheard of for Dragon Quest’s heroes to fight each other – this is a special case.

Alongside the Dragon Quest Museum and the Dragon Quest Spectacle Tour, seeing a picture of all of the series’ heroes lined up side by side, I couldn’t help but think… “Wow… Now this is cool…” Not even limiting it to Dragon Quest, there’s just something exciting about seeing heroes from the past that had all been fighting their own fight together in one place, isn’t there? To that end, I included elements like that – even in Hero’s Final Smash, all of the heroes are lined up together, side by side.

The decision to have Hero be voiced actually came later, at first, he wasn’t going to say anything in true Dragon Quest fashion – that was what we were going ahead with. However, with voicework coming to the game in Dragon Quest XI for Switch, I took it under consideration.

I also had to choose the voices for the heroes other than XI’s Luminary, but we’ll discuss that at a later date.

This was another fighter that I received a lot of requests for – mostly from overseas. That being said, King K. Rool and Ridley were pretty fervently requested too. And as I continue to grant these requests, I can only see a future where there’s even more of them!

I’d say getting them to be able to be in the game was more difficult than any other fighter, though. Including them may seem natural since Banjo-Kazooie was originally on the Nintendo 64; Microsoft currently holds the rights to the characters, however.

The game’s development was originally handled by Rare, the company that made Donkey Kong Country among other games; Nintendo’s shares were sold to Microsoft in 2000. Some time later, Microsoft ported Banjo-Kazooie to the Xbox 360.

Speaking of Microsoft, it originated as a rival to Nintendo; with that said, however, there’s no sense in throwing salt at former business enemies.

Bearing all of that in mind, they willingly loaned us the rights to the character for this game, and Rare’s employees were received with open arms. Thanks to that cooperation, we were able to help a lot of fans’ dreams come true!

These are my own thoughts, but things like fighting over the differences between consoles and systems don’t really matter – it’s not worth worrying about. If a game is good, I’m going to respect it no matter what system it’s released for. A lot of other developers probably feel the same way. Having characters included in Smash Bros. is something that takes a lot of effort and support from a whole host of people, and it’s something that transcends profit or loss. The job I have is incredibly unique, and I do my best to create things that even please fans of the source material.