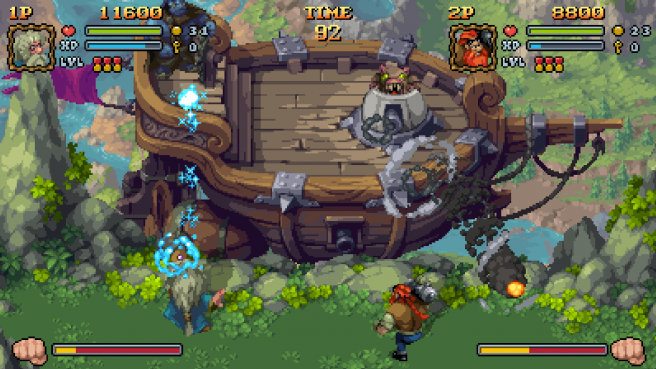 After it was funded on Kickstarter a year ago, the pixel-art arcade adventure Battle Axe was confirmed for Switch. Numskull Games will now be publishing, and it’s been announced that the game is on track for April.

Here’s an overview of Battle Axe:

For as long as you and your people can remember, your homeland of Mercia has been held in the tyrannical grip of “Etheldred”; a despotic sorceress who resides in a seemingly impenetrable tower in the distant icy wastelands to the north. Every seven years she sends her armies south to handpick inhabitants from each township who will be subjected to a life of slavery, and they are never heard from again.

A call is sent out to champions across the land pleading with them to put an end to her rule. An elf, a wizard and a marauder answer the call. Join this band of heroes on their quest the vanquish evil from the land and defeat Etheldred once and for all!

– Pixel art fun – an adventure for pixel art enthusiasts, with gorgeously designed characters and environments to enjoy with every frame
– Hack n’ slash adventure – familiar yet revitalised, thanks to new gameplay elements, improved controls and pixel perfect animations
– Enjoy a timeless melody – a superb soundtrack by legendary composer Manami Matsumae
– Solo or co-op – choose from three highly-detailed heroes to embark with on your quest, playing alone or with a friend in local co-op
– Inspired by the classics – inspired by genre classics like Gauntlet and Golden Axe

We have a new gameplay video for Battle Axe below.