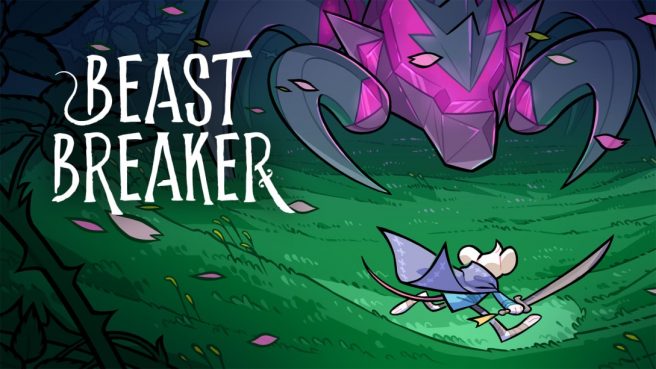 Beast Breaker, a turn-based action adventure game made it to Switch this week, and gameplay is now available. The title was made by the creator of Threes.

We have the following overview for Beast Breaker:

Beast Breaker is a new turn-based action adventure from the creator of Threes. You play as a tiny warrior named Skipper, tasked with defending innocents from giant mosaic Beasts that threaten to destroy everything.

The game combines satisfying pinball physics with tactical decision making. Pick a style of attack, line up the best angle, and launch! Watch Skip careen around the screen and break the giant Beasts to pieces.

Along the way, you will meet a vibrant cast of characters who will help you on your journey, and maybe even help you discover the origin of the Beasts…

⚔ Master 4 unique fighting styles (Sword, Bow, Hammer, and Throwing Knives)
⚔ Harvest ancient magic from the Beasts to craft new weapon parts
⚔ Mix and match hundreds of weapon components to create your perfect loadout
⚔ Track down the Beasts and exploit their weaknesses
⚔ Recruit powerful allies with unique battle abilities
⚔ Travel the world, from the Corrupted Coast all the way to The Glitchpeaks

You’re just a small mouse, but you can make a big difference. Answer the call to break these Beasts!

View the Beast Breaker Switch gameplay in the video below.

Beast Breaker is out now on Switch as a digital download via the eShop. English is its only supported language.