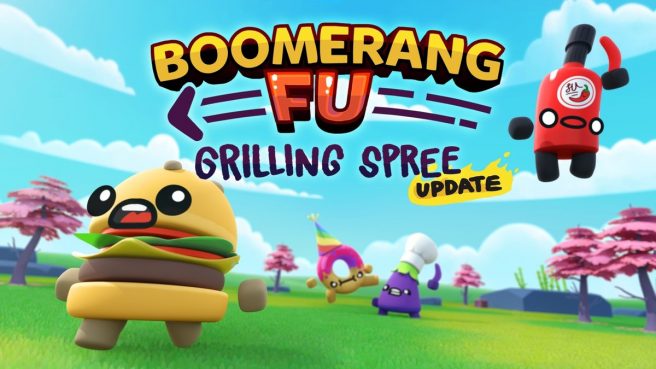 Boomerang Fu is a frantic physics party game for up to 6 local players that lets you slice and dice your friends with boomerangs. With the Grilling Spree Update, we’re introducing two spicy new characters to the roster: you can now play as the cheeky Burger or the formidable Hot Sauce.

We’ve also added six new arenas to the game with some fun tricks and traps that we think returning players will love. These arenas include a cloudy mountaintop cut in half by a deadly moving block trap, and a tranquil bamboo grove — ­the perfect destination for your epic final showdown.

Finally, the Grilling Spree Update brings unlockable costumes to Boomerang Fu for the first time. Every time you play a match, you now earn experience points that let you unlock hats and costumes to garnish your favorite characters with. Get ready to roast and toast your foes in style with top hats, snorkels, cat ears and many, many more.

We’ve included a trailer for the new Boomerang Fu update below.