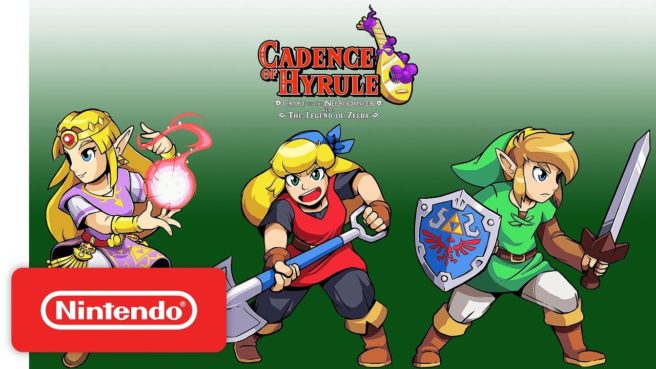 The developer behind Crypt of the NecroDancer unveiled its latest project today, and it’s not one that many could have seen coming. Cadence of Hyrule, which uses content from Nintendo’s historic Zelda series, launches on Switch this spring. IGN gained some additional details as to how the collaboration happened.

Brace Yourself Games founder Ryan Clark told IGN that the team approached Nintendo about possibly using Zelda as something like DLC. In the end, those talks ballooned into a brand new game.

“We were considering making a new Nintendo Switch project, and we imagined how cool it would be to have Zelda characters appearing in NecroDancer; say as DLC. To our surprise, Nintendo was extremely interested in the prospect, and before we knew it we were working on a completely new title, mashing up NecroDancer with The Legend of Zelda!”

Meanwhile, Nintendo of America’s manager of publisher-developer relations Kirk Scott added that “developers are always reaching out to Nintendo to include IP in their games. When you look at a case like Cadence of Hyrule, there’s special cases in some instances where our Japan team see content and see titles that they want to work with and [the interest is] a two-way street, really.”

Clark went on to say that Cadence of Hyrule “is first and foremost a new entry in the NecroDancer universe,” but the team “took extensive care to ensure that it could be considered to be both” a Zelda game and a Necrodancer game. Despite not being the type of Zelda title fans are accustomed to, Scott noted that “[Brace Yourself Games] worked directly with our Japan teams to get that [Zelda] content in there.”

Finally, Scott said he stills views Cadence of Hyrule a “Nindie”, though “it is one of the first independent developers to use Zelda content.”