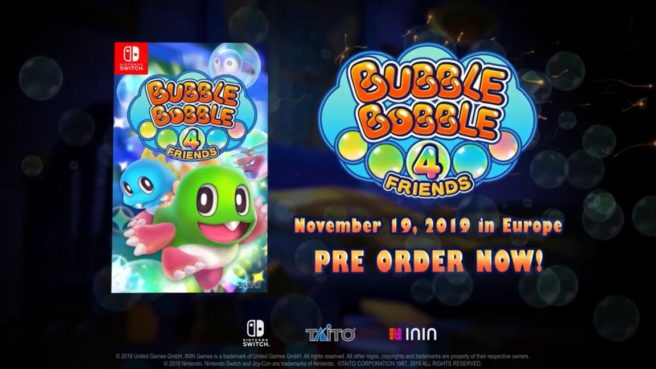 Taito’s classic series Bubble Bobble is returning with a brand new entry only on Switch. Revealed today, Bubble Bobble 4 Friends is coming to Switch on November 19 in Europe and Q1 2020 in North America.

Here’s everything we know about the game thus far:

After more than 10 years, Nintendo Switch players can look forward to a sequel of the cult 80’s game series Bubble Bobble by Taito. The new Bubble Bobble 4 Friends was developed by the original studio TAITO Corporation and will include a brand new local 4-player mode.

The sequel will be released both digitally and physically exclusively for Nintendo Switch in Europe on November 19, 2019, with the release in the USA to follow in the first quarter of 2020.

As in the previous highly popular series, the thrilling and epic bubble fight starts again!

One night, a child’s room became enfolded by a miraculous light and every object under its rays suddenly came to life – including the child’s most favorite toy, the little dragon called Bub. Full of jealousy, the wicked magician Bonner challenges the friendly dragon to battle.

We have the first Bubble Bobble 4 Friends trailer included below.