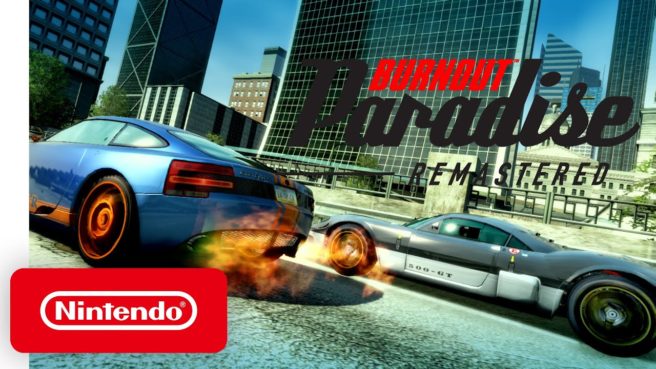 Burnout Paradise Remastered was previously thought to be releasing for Switch on June 19 after it was listed on the eShop. EA has made the news official today.

Burnout Paradise Remastered is a redone version of the 2008 game. It’ll run at 60 frames per second on Switch, and has a bunch of DLC included.

Here’s the official overview from EA:

The multi-million selling Burnout franchise races onto Nintendo Switch for the first time ever.

Make action your middle name as you rule the open streets of Paradise City, in Burnout™ Paradise Remastered. Test the limits of skill and endurance as you push the boundaries of speed itself. Hurtle through hectic downtown avenues to wild mountain roads. Smash through traffic, wreck your opponents, and use the open city to find shortcuts. Leave your friends in the dust and define your route to victory – or crash out in spectacular and devastating effect.

Packed with 8 pieces of extra content, with 130+ vehicles, new areas to explore such as Big Surf Island, and hundreds of online challenges, embrace high-octane stunts and wanton destruction in one of the greatest arcade racers. Fully optimized for the Nintendo Switch in 60 FPS, including pinch-and-pull map control for ease of navigation. Burnout Paradise Remastered is the ultimate driving playground to play with friends or on-the-go.

Throw out that driver’s handbook and blaze your own path to victory, leaving a trail of speed and destruction across the streets. Send your car launching, spinning, and smashing through traffic. Leave a very expensive trail of wreckage in your rearview. Race hard and crash harder, wrecking your friends online, or joining forces in hundreds of online challenges

Burnout Paradise Remastered delivers the complete original game and 8 main DLC packs, including Big Surf Island, Burnout Bikes, and the Cops and Robbers pack. With new locations, challenges, and 130+ vehicles to explore, from hot rods to vintage classics – ready to race and ready to wreck!

Burnout Paradise Remastered will be sold physically and digitally on Switch. If you plan on downloading the game, you’ll need 4GB of free space.