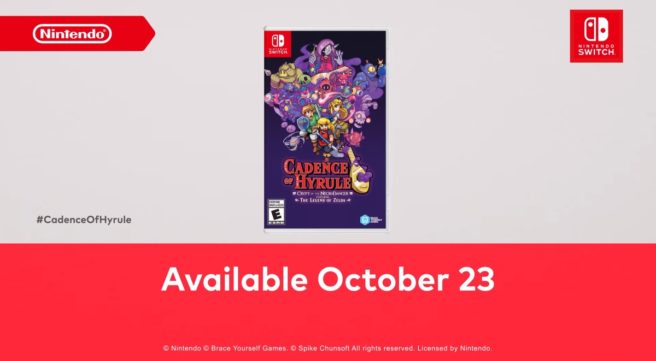 Cadence of Hyrule – Crypt of the NecroDancer is getting a season pass, Nintendo has announced. Three different DLC drops are planned, with the first one arriving today.

Pack 1: Character Pack – In the first pack, five additional characters join the game’s ensemble, including Impa, who excels in ranged attacks with the Naginata weapon, and Aria, perfect for players who like a challenge. It’s game over if you take one hit or miss a beat with her.

Pack 2: Melody Pack – After purchasing this pack, 39 songs will be added to the game, including remixed versions of the game’s background music. Players can change the background music at any time so they can listen to their favorite songs while journeying through Hyrule.

Pack 3: Additional Story Content – Symphony of the Mask – Play as the mysterious Skull Kid and venture through a new map in the third DLC pack, complete with new songs and a new story. Skull Kid also possesses the power to change abilities based on the masks he dons.

A physical version of Cadence of Hyrule will also release on October 23.