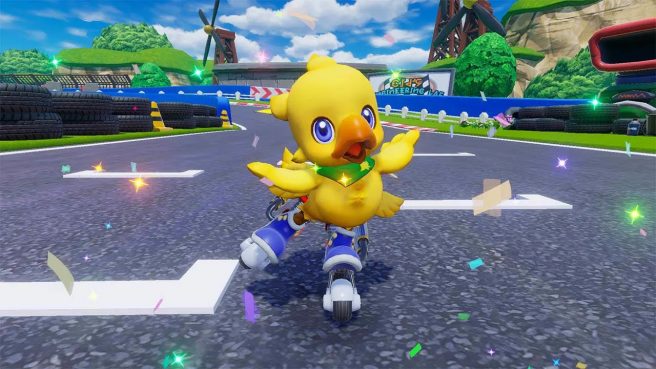 After it was revealed in last week’s Nintendo Direct, some of the first gameplay has emerged for Chocobo GP. Direct-feed footage has emerged from IGN and V Jump.

In case you missed it, here’s some information about the game:

Featuring a variety of whimsical characters from across the franchise, players will be able to dash to the finish as the game’s namesake and star, Chocobo and friends. Chocobo GP will challenge racers to master courses from well-known Chocobo and Final Fantasy series locations. Set off on a new journey with Chocobo and friends as they enter a racing tournament to win an unbelievable reward: a wish for anything their heart desires!

Players can look forward to a variety of exhilarating features from Chocobo GP, including:

– Various game modes – Play various modes including Story and Custom Races. Also enjoy exciting survival races in a bracket-style tournament, which can support up to 64 players. Select modes support online and/or local multiplayer.
– Thrilling courses – Race through various courses taking inspiration from the Chocobo and FINAL FANTASY series, including Cid’s Test Track, the streets of Alexandria and Zozo and the Gold Saucer.
– Roster of Beloved Characters – Players can choose from a wide selection of Chocobo series characters.
– Magical magicite – By collecting magicite, found within Magic Eggs scattered around the various tracks, racers will be imbued with magic, such as Fire or Aero, which can be used against their fellow racers to give them a competitive edge and speed to the finish.

Take a look at the Chocobo GP gameplay below.

Chocobo GP is due out exclusively for Switch in 2022. You can keep track of the title through the official website here.