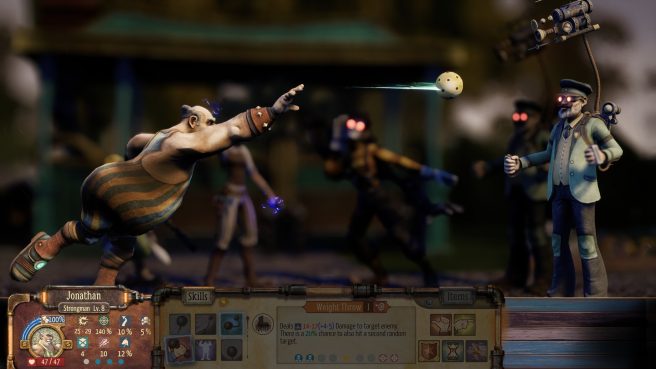 Circus Electrique, the upcoming turn-based tactical RPG from publisher Saber Interactive and developer Zen Studios, has been given a new gameplay overview. It provides a first look tour of the greatest show in London, where players will need to defend the city from maddened citizens by using unique carnival talents, recruiting new entertainers, correctly utilizing the right abilities, tactics, positioning, and more.

Circus Electrique is part story-driven RPG, part tactics, part circus management, and completely enthralling – all with a steampunk twist. When everyday Londoners mysteriously turn into vicious killers, it’s up to the circus’ lineup of Strongmen, Fire Blowers, Clowns and other performers to save the city in tactical turn-based 4v4 battles. With 15 playable classes in total, each with their own eccentric skill-sets, you’ll need to carefully assemble your motley crew in order to save the city.

– Electrifying RPG Combat: Test the skills of Strongmen, Fire Blowers, Escape Artists, Clowns, and other classic circus performers – there are 15 playable archetypes in total, each with deep tactical options in battle. Assemble the most ideal combination of acrobatic artists to fight against over-the-top enemies.
– Manage the Greatest Show in Steampunk London: Despite the chaos, the show must go on! Rebuild the circus to its former greatness and beyond, recruiting and training the most talented performers from all over the world. Performers’ skill, chemistry with one another, and overall Devotion combine to determine the success of a single show – and you’ll need every single spare Shilling you can get to keep everyone paid and happy.
– A Circus Like No Other: Immerse yourself in a striking world based on vintage circus posters, Victorian-era archetypes and classic steampunk charm.

Have a look at the gameplay overview trailer for Circus Electrique below.

Circus Electrique will debut on Switch later in 2022.