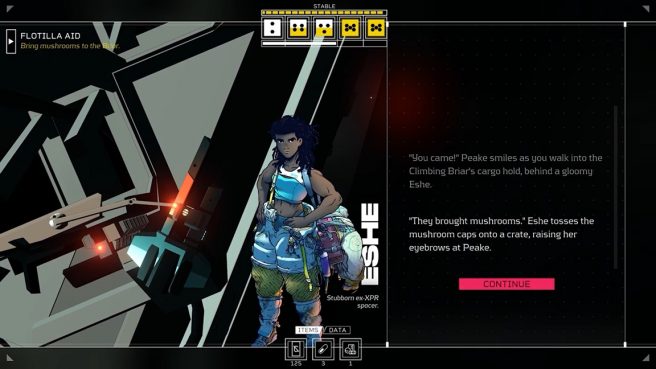 Citizen Sleeper gained its new Flux DLC this week, and to celebrate Fellow Traveller and Jump Over the Age have prepared a new trailer.

In the new episode, “pressures in the Helion system have brought the first ships of a refugee flotilla to the Eye. You will meet and help those that get on-station before the quarantine locks them out.”

Pressures in the Helion system have brought the first ships of a refugee flotilla to Erlin’s Eye. You will meet and help those that get on-station before the quarantine locks them out.

FLUX will kick off a new overarching storyline that plays out across all three episodes, expanding on the wider narrative of the Helion System, the star system in which the Eye orbits. The storyline will also introduce a number of new characters, the first of which is Eshe, captain of the Climbing Briar. A stubborn and driven spacer, Eshe’s fate becomes tangled up with the flotilla. Her story will challenge the player to choose how to deal with a growing crisis that could threaten the entire station.

In FLUX, you’ll also cross paths with Peake, the second member of the Climbing Briar’s crew. They have a cooler head than their captain and an ability to disappear when necessary. The player will get to know more about them as they make a plan to get much needed relief through the quarantine to the refugee flotilla.

All players on Switch can access the free DLC now. A second DLC episode will follow in October and a third one will close everything out in 2023 with both offering new characters and expanding on the wider narrative of the Helion System. Every piece of extra content will be free.