Collavier talks about why Comic Workshop Miiverse screenshots were disabled 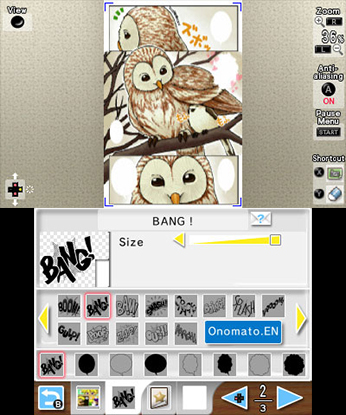 Yesterday, Collavier announced that screenshot sharing functionality will be returning to Comic Workshop through an upcoming patch. The update makes it possible to post images to Miiverse.

Collavier has now sent out a comprehensive follow-up, revealing that adding screenshots to Miiverse was never initially planned to be available. The company also talked about what’s changed to allow for the feature.

You can find Collavier’s full comments below.

My name is Jeremy and I’m taking care of international relations for Collavier on top of being a programmer. The same Jeremy you can see on Miiverse!

What happened with the community?

Firstly, you should know that posting screenshots to Miiverse for Comic Workshop never was planned to be available. The few days of authorized screenshot posting at the software’s release were a mistake.

With the Workshop Gallery (dedicated website for Comic & Painting Workshop) being quite popular in Japan, we’d hope western users would use it as well.

Why was posting screenshots not authorized?

The software include a Picture tool, a tool with which you can import photos saved on your console’s library. In other words, you could post a photo of anything (persons, places, etc.) to Miiverse. As you may be aware of, it is strictly prohibited to do so on Miiverse communities.

Why does the update makes it possible?

A new option for the user to choose between using the Picture tool and the possibility to post screenshots is now integrated.

When you create a new folder, a new function appears on the lower screen and this choice will be permanent for the whole folder and its content (pages).

Unfortunately, taking screenshots from content made before installing the update will not be possible. The reason is simple, use (or not) of the Picture tool isn’t imprinted in the save data, thus the software can’t identify if you used or not the said Picture tool.

We understand that this is quite unfortunate but there is absolutely no other choice.

The solution to the problem was found during the development of Comic Workshop 2 (available in Japan) and seeing this, I personally asked if it could be possible to make a patch for the previous Comic Workshop and for Painting Workshop. The request was approved and we started working on it in January. It took time because it is more difficult to implement than you may think and a lot of time has been spent on debugging.

It was specifically made for our dear North American and European users. The update isn’t available in Japan and I’m not sure it’ll ever be released.

Can we be sure it’ll not be disabled again?

No. We made our best to make this update available but we are in no way responsible for Miiverse and its services. We never know, maybe someone will find a bug which makes possible to post pictures, in that case the fate of the community will depend on this user posting or not.