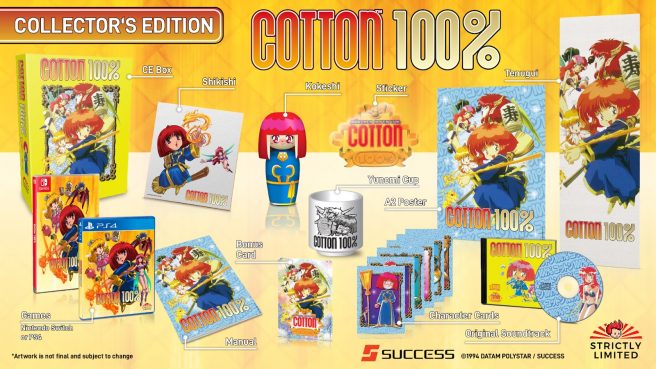 The news for the Cotton series continues, as ININ Games has now announced that Cotton 100% will be appearing on Switch next week.

Cotton 100%, a scrolling shoot ’em up, first appeared on the Super Famicom in 1994. It will be making its western debut for the first time when it releases digitally for Switch on October 29.

Strictly Limited Games is also planning a couple of physical versions for a later date. Fans can choose between a €29.99 limited edition (2,500 copies) containing the game and a manual or a €64.99 collector’s edition (1,500 copies) featuring a ton of physical goodies.

We’ll also mention that Cotton 100% will have a standalone cartridge release compatible with the SNES. 900 NTSC copies and 600 PAL copies will be made for €49.99.

This wasn’t the only news for the series, as Panorama Cotton was confirmed for Switch a few days ago and will also launch on October 29. More information about that can be found here.