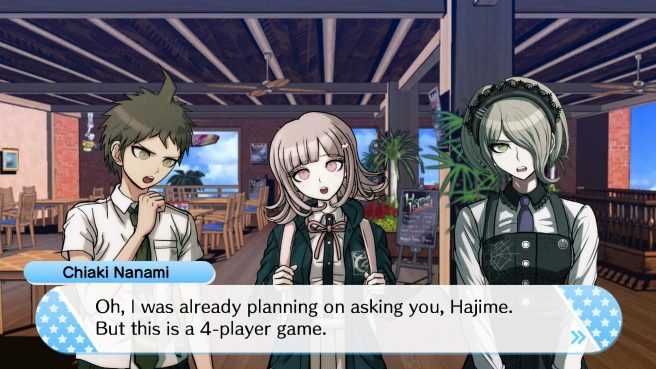 Danganronpa S: Ultimate Summer Camp follows your favorite Ultimate gifted students as they develop their talents at a summer camp and discover Hope Shards. Complete the boardgame to obtain that character’s Hope Shard, and collect 10 Hope Shards to progress the main story.

How and why did the talent development summer camp start? Look forward to story details in the future!

A tropical summer camp filled with ways to develop your characters

1. Growth Square
Stopping on a Growth Square will grant experience points. As you advance to the later islands, the amount of experience gained from Growth Squares will increase. These squares are the most direct path when it comes to character growth, so you can’t go wrong with stopping on one when you’re not sure where to go.

2. Battle Square
Battle Squares trigger battles with Monokuma-type monsters known as Monobeasts. Upon defeating them, players can earn experience points and currency used in the boardgame known as Jabbercoins, but if they lose, they will be sent back to the beginning of the board, resulting in a time loss. There are also Midboss Battle Squares, which spawn Monobeasts that are stronger than those found in normal Battle Squares.

3. Event Square
Event squares trigger various events that occur in the summer camp. Some events have multiple options that will change the outcome and resulting stat increase.

The characters that can be developed are one of three types: Athletic, Cerebral, or Balanced. Each has a special ability that triggers on the field (boardgame) and a specific battle command.

On the field, type-specific special abilities will trigger at random at the beginning of the turn. Athletic types have Frenzy, which allows them to advance twice as far as the number they rolled and increases their stats in battle.

Type-specific battle commands like the Cerebral type’s Ultra Magic, which inflicts 1.5 times the damage of a standard attack, can only be used once per battle.

Keep an eye out for other useful squares!

5. Card Square
Card Squares grant useful cards that can grant an advantage in the boardgame. There’s a limit to how many cards can be held at once, so be sure to use them to reap their benefits. Card effects include movement buffs that double the number of squares you can advance and those that increase battle stats.

6. Shop Square
On Shop Squares, Jabbercoins earned from battle can be used to purchase equipment and cards, and unneeded cards can be sold for Jabbercoins. It seems there are also ways to acquire items without spending coins…

7. Talent Square
On Talent Squares, the player can pick and acquire one of three types of Talent Shards, which are needed to learn new skills. The quantity and type of shard required varies depending on the skill, so it would be a good idea to decide how you would like to develop your character before deciding on the shard type and skills to learn.

Danganronpa S: Challenge the Tower of Despair with the characters you developed!

Characters developed in the boardgame can be used in the Tower of Despair, a battle mode in which players fend off waves of enemies. Form a party of up to four members and take on Monobeasts awaiting you in the 200-story tower.

In the Tower of Despair, characters don’t grow stronger, even after winning battles. Carefully developing characters in the boardgame mode is the key to victory!

The battles on each floor have three missions assigned to them, and clearing them will grant Monocoins as a reward. Monocoins are needed to unlock new characters, so be sure to take on as many missions as possible.
In addition, when Monobeasts are defeated, the player can earn various drops and materials. Gather materials to craft equipment and make your party even stronger.

Danganronpa S: There are many MonoMono Machines in the School Store

Spend your Monocoins and Monomicoins at the MonoMono Machines in the School Store for a chance to pull new characters and items. The three types of MonoMono Machines have different drop rates and require machine-specific coins.

You will gain a greater advantage as you obtain new characters and items, so don’t hesitate to use up your coins as they come in.

For example, the MonoMono Yachine is more likely to grant swimsuit SR cards, while the Golden MonoMono Machine only contains high-rarity cards.

Don’t worry about saving coins–keep spending them to fill out your roster and inventory!

Take a closer look at the gallery below for the Danganronpa S features like School Store and Tower of Despair.

Danganronpa S: Ultimate Summer Camp launches for Switch on December 3. The game will also be included in Danganronpa Decadence, which is due out on the same day.