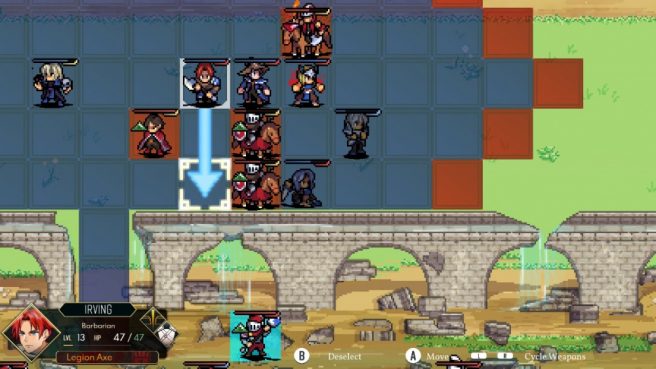 Dark Deity made it to Switch this week, and we have a new trailer to celebrate. The video comes courtesy of Freedom Games and Sword & Axe.

A world on its last strand of hope brought to its knees by a Calamity centuries ago that tore down its mighty civilizations. Petty kings rule in place of grand emperors of old that wage fruitless, ill-advised wars picking over ancient ruins like glorified scavengers.

Lead a team of four students in the Brookstead Military Academy, who are shut down on the mysterious orders of King Varic. The ruler of the Kingdom of Delia is preparing to break a millennium-old treaty and Brookstead students make for fine cannon fodder… However, these four soldiers are destined for more than just acting as unwilling meat for another grinder.

They may not know it yet, but they will make their mark on history.

A World Plagued by War

Lead soldiers into the fray across a world torn apart by endless war and magical cataclysms.

Test your tactical mettle. Maneuver, attack, break through, and – maybe – turn the tide of the war.

Engineer the rise of legends, from a pile of raw conscripts to a band of mythical heroes.

Heroes in the Making

Carefully nurture your squad to ensure survival through long bouts to make a difference in a seemingly hopeless world.

Assemble the squad from 30 playable characters, with their own background, personality, and motivations, then train them and pick from 54 distinct classes, with their own iconic attacks and skills.

Outfit each team with hundreds of weapons and spells, from simple blades and missiles to ancient, eldritch artefacts that produce world-ending magic.

Defeat doesn’t mean permadeath, but there is a price to pay: Every time a warrior falls, it means a grave wound, a stat penalty, and weakening your squad.

A Glimmer of Hope

Hope is a rare commodity in a world ruined by Calamity, good thing these heroes are filled to the brim.

Defy the fates and make a difference as the head of this unlikely band of heroes.

Watch characters bond together on the battlefield and their relationships evolve through 400 individual conversations.

Remember: Any hero can make a difference – if they live long enough.

For those interested in Dark Deity, it can be bought on the Switch eShop.