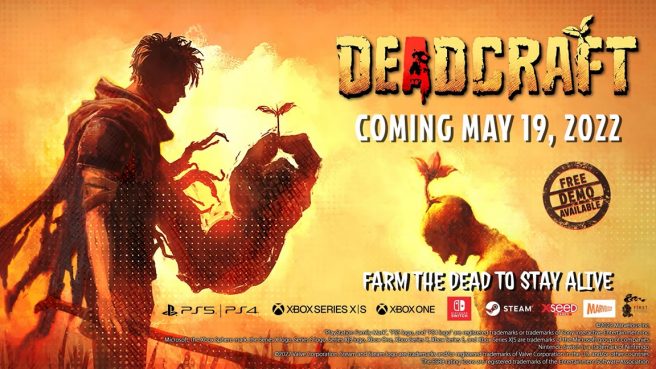 XSEED and Marvelous have announced Deadcraft, a new simulation / action RPG where players must craft to survive in a treacherous world ravaged by zombies. It’s being made by Marvelous’ First Studio, the creator of Daemon X Machina.

Below are the first official details:

Deadcraft is the newest deadly and daring game from Marvelous’ First Studio, creators of Daemon X Machina. As if a hail of meteors reducing earth to a barren wasteland wasn’t bad enough, the devastation released a mysterious virus that resurrected the dead. Ravaged by fire from the sky and the dead below, only a fraction of the human population remains, largely clustered into small outposts where power-hungry opportunists capitalize on the chaos. A rare survivor of exposure to the virus, part-zombie Reid is captured by the twisted Nebron, leader of the Ark. After escaping from the torture table into the surrounding wasteland, Reid is determined to return to the city and exact some apocalyptic justice.

Stare in wild wonder as the half-human, half-zombie protagonist Reid slices through foes on a quest for righteous vengeance! Wield his inhuman zombie powers to fend off enemies while searching the wasteland for answers to what happened to the only man he could trust. Build fantastical new armaments, conjure curious concoctions, or even grow and harvest zombie soldiers to stand by Reid’s side against whatever the apocalypse throws at him. It’s a dangerous world, and in order to stay alive Reid must take full advantage of the dead!

▪ Farm the Dead to Stay Alive ‒ Plant fresh corpses (or just a combination of limbs) into the ground and give them a little TLC until they sprout into an undead army of infantry, sentries, and more!
▪ Creeptastic Crafting ‒ Surviving the apocalypse sometimes means using whatever scraps one can find to make new weapons. Other times it means enlisting a loyal undead to assist in building and running an entire factory of grotesque machinery churning out an unholy amalgamation of survival items.
▪ Death-Defying Powers of the Undead ‒ Reid’s zombie side gives him a powerful advantage in a fight, allowing him to shield himself from danger or swat enemies away like annoying gnats. But as each devoured enemy pushes him closer to his zombie side, he’ll have to take care to maintain what little humanity he has left.
▪ Become a Savior…or a Scourge ‒ Help out other survivors to learn new recipes or abilities. But if Reid’s hard up for money or supplies, shake down a local and take it off them…as long as he doesn’t mind potentially becoming a wanted man.

A Deluxe Edition is planned (priced at $39.99), which contains the post-launch DLC packs “It Came from the Junkyard” and “Jessie’s Wasteland Wares”. The first one pits Reid against a new threat named Revenant, whose sights are set on the Ark. With the second piece of DLC, players will step into the shoes of eccentric nurse Jessie as she sets up shop to raise funds for her beloved lady Duna. Both DLC packs will also be offered individually ($7.99 each).