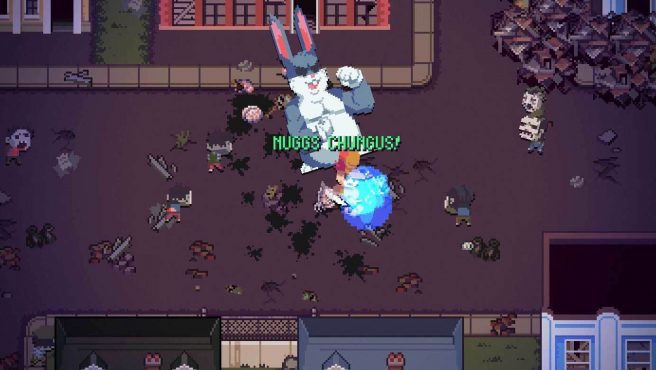 A major 1.0.6 “Liver” update recently went live for Death Road to Canada on Switch. It comes with new characters and a slew of other content, not to mention various tweaks and fixes.

Below are the full patch notes for the Death Road to Canada 1.0.6 “Liver” update:

– Added a News Box to the title screen, as the old news method seemed too jarring. We will use this mostly to announce either major update changes or announce future games we launch. You can turn this off in the News Options if you want, it remains off until another update happens

– New Perk: Pyromaniac. You get a Blowtorch that regenerates between missions, and immunity to fire. You can pair this with Phoenix to retain fireproofing after your first death, or combine it with Specialist to sacrifice all weapon slots to upgrade your Blowtorch to a Napalm Launcher! Have fun

– New Trait: Fast Learner. Start with low skills, but gain double points to Shooting, Medical, and Mechanical skill every time you get a respective skillup for one of these. This effect stops at 4 in each skill, and if you get a skillup at 3, you’ll still shoot straight to skill 5

– MORE UNLOCKABLE HATS added, with conditions for unlocking them
– Added more hair and head options, and new skin color options. The weirdest ones are not used by the random character generator, but you can use them in the Custom Character maker and as Familiar Characters

– 4 anime reference characters that temporarily summon 4 other anime reference characters. [sfx: The JoJo theme of your choice]
– Summoned Stamps have infinite energy, they simply don’t get tired. They also do not bleed, so an injured or dead Stamp will not attract zombies
– Having a Stamp User in your team can lead to finding more Stamp Users in Road Events. The more you have on your team, the faster you find the next Stamp User, though you can still find all of them (eventually) with just one Stamp User in the team
– Made a special character that is far bigger than previously thought possible, dwarfing the Mecha Mountie in size

– BROOMY, who gets a very special attribute that may be hard to figure out at first

– DELTA, the supersoldier/dog, who is a dog/supersoldier trained by the US GOVERNMENT to have enhanced combat potential and super-accuracy with firearms
– DELTA is capable of getting +3 over the normal maximum for the Shooting skill
– DELTA has two carrying slots, DOUBLE that of a normal dog. No one knows how or why

– Giant buff for Sacrificial Altars. In exchange for losing 2 health, a surviving character now gets Strength, Fitness, AND Shooting instead of just a chance for one of those. If someone dies to the altar, in addition to the previous loot table, it will also give the entire rest of the team a point in strength, fitness, or shooting at random

– CIVILIZED NERF: Only gives 1 point in medical and 1 point of mechanical now. Still gives the extremely overpowered combo of good personality stats, though

– Superdogs can now bark without dropping their weapon

– The Road Pause Menu now lists the speed of your car

– Pukeyballs are buffed, due to OVERWHELMING demand. They stack higher now
– All temporary summons are now set at MAXIMUM AGGRESSION SETTINGS. This includes Pukeyballs, chickens, robots, and Stamps

All Switch players can download the Death Road to Canada 1.0.6 “Liver” update now.