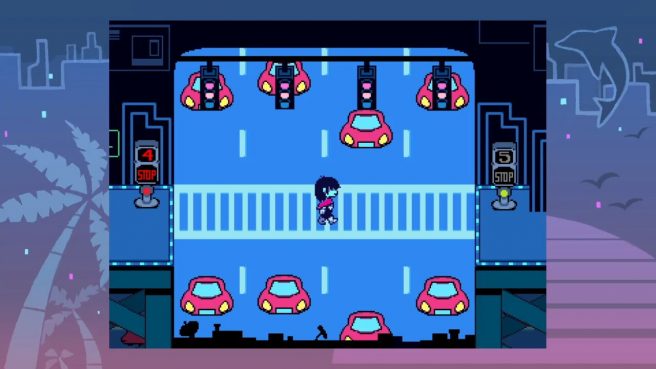 Around the release of Deltarune Chapter 2 on Switch, Nintendo published an interview with creator Toby Fox that touched on various topics like its development and characters. However, the discussion was only available in Japanese. Since it was never made available in English, our team has now gone ahead and translated the interview in full.

Here’s the full Deltarune Chapter 2 talk with Toby Fox – as well as some concept art:

Hello, Toby. So Chapter 2 has finally been released. How do you feel right now?

Now that I’ve finally finished it, I feel… exhausted. I want a break. Hey, can you pass a request on to Mario for me? Ask him to take me to Yoshi’s Island.

I want to have some of that green fruit that increases your time limit. If I had some for breakfast, I could have 27 hours in the day and sleep in.

It would be nice to increase our time limit… Well, I’m glad that you seem well. This makes two and a half or three years since the last release.

Chapter 2 itself actually took about a year and a half to develop. A lot had to happen before we could get development underway. But three years is a long time… I feel a bit sorry that I made everyone wait so long…

What part of developing Chapter 2 did you face difficulties with?

I did all the programming for Chapter 1 and Undertale on my own, but I hurt my wrist, so I can’t program for long periods at once anymore… so about 90% of Chapter 2 was programmed by other team members. Yes, that makes me the director from now on (please picture a professional dog wearing a beret).

Giving orders to people is easy. But having them make what’s in my head exactly as I envisioned it… is about 10.2 times harder than doing it myself!

It took a lot of effort to make the hidden boss enjoyable in particular. I hope all the players can enjoy the experience of becoming big (long-press the A button!)

I didn’t know such a hidden feature existed… Wait, it’s not hidden at all?! Please give it a try, everybody. Also, what did you pay particular attention to when making Chapter 2?

If there’s any point I gave special care to, it would be for the production to be emotionally effective. I wanted to make sure the timing wasn’t off, or a character wasn’t smiling at a time they shouldn’t be, or that a serious scene wasn’t ruined with a joke. But if it was a reeeally funny joke, I might do it on purpose anyway… (*Toby squeezed his bicycle horn [fwoo~]. The atmosphere created by the horn made the player’s tears dry up.)

The characters that appear this time are charming as always. How were they born?

I made most of the main characters when I thought “this story needs a character like this.” For example, I needed another villain this time around, and I had King last time, so I decided to make it Queen this time.

From there, I wrote a ton of dialog and then rewrote it about 10,000 times over 6 years… Then I had a complete new character and everyone lived happily ever after! Or so I thought, before I rewrote it again… (repeat for six years)

With the other characters, I started with the visual design, and then thought, “What kind of character would this be?” That was how a lot of the characters, such as Lancer and the music shopkeepers, were born.

The musical shopkeepers in particular were amazing… They were adorable, including the sound.

I actually have another story about the musical shopkeepers. I asked a designer I love to design a musical enemy, and they gave me three samples. I liked all three of them, so I couldn’t settle on just one… so that’s how those three came to be.

So, next is Chapter 3. About when do you think will it be released?

Whenever an interviewer asks me about when Chapter 3 will be released, I add another year before it comes out (that’s another year just now!)

To answer seriously, I want to release Chapters 3, 4, and 5 as soon as they’re done. If it took a year and a half to develop Chapter 2, then based on some simple calculations… Huh?! No way! Help me!

Please leave a message at the end for the Japanese users who will play this game!

Thank you for playing my game, everybody.

I actually studied Japanese, so I participated in the translation for the Japanese version as a supervisor. I read all of the translated in-game text, made comments everywhere I thought I needed to, and communicated them to the localization team, so all of the Japanese text you read has been personally okayed by me.

When I read the Japanese text, I had to take my hat off to the high-quality localization that the translator* worked so hard to create. I’m very, very satisfied with the Japanese translation. There aren’t many cases like this in indie game localization where the translator and original creator work together to communicate the “soul” of the work to the player.

*Keiko Fukuichi, who localized Undertale and Deltarune, has also worked on other games such as Hades and Return of the Obra Dinn.

I found out that that’s why the BGM for the Mettaton battle in Undertale is titled “Karei naru Shitou (Glamorous Battle to the Death).”

The original English title is “Death by Glamour,” so if it was something like “Guramaa ni Korosareru (Killed by Glamour)” in Japanese… The Japanese players might get the mistaken idea that Mettaton is an enemy that suffocates the player to death with his huge boobs and butt.

…Well, that would be… mostly accurate.

Thank you very much, Toby. Deltarune Chapters 1 and 2 are available starting today, so make sure to check it out and give it a play.

Alright, everyone, have a good indie life!

Deltarune Chapter 1&2 is now available for Switch via the eShop.

Translation provided by Kim Louise Davis on behalf of Nintendo Everything.