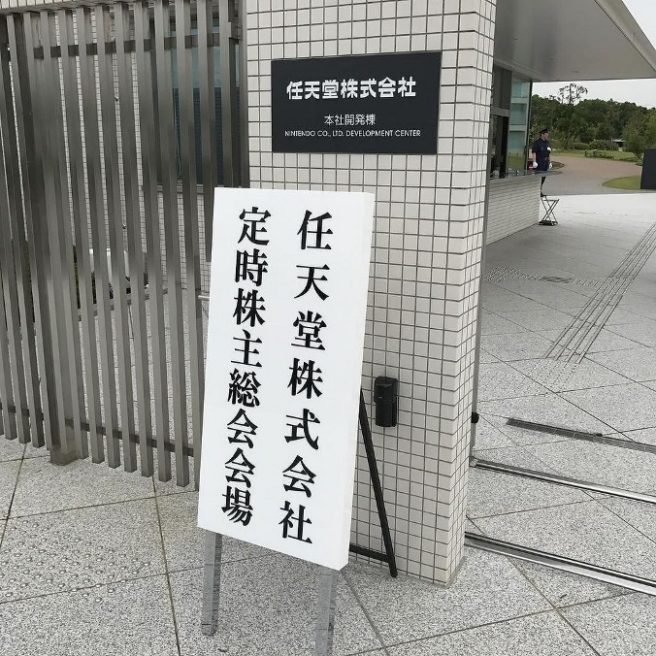 Update: Bumped to the top. All done. Some interesting responses from Tatsumi Kimishima, Shigeru Miyamoto, and others. We’ve rounded everything up below.

Original: Nintendo’s 77th Annual General Meeting of Shareholders is currently underway. We’ll be reporting on any news from the event as it happens below, courtesy of NStyles and cvxfreak.

– Zelda: Breath of the Wild sales at 2.76 million units on Switch
– Zelda also sold 1.08 million copies on Wii U
– Total sales for Zelda at 3.84 million
– Switch sales at 2.74 million units during the most recent fiscal year
– Mario Maker and Kirby were well-received on 3DS
– Pokemon GO has helped sales of past Pokemon games; hardware sales up outside Japan
– On mobile, Mario Run and Fire Emblem Heroes well received
– NES/Famicom Mini also did well
– amiibo sales dropped due to lack of new games
– Assets increased by 172 billion yen
– Debt has increased by 82 billion yen, secondary assets up by 90 billion yen
– Nintendo focused on increased the populace’s access to Nintendo IP
– Working on growing game hardware & further establishing smart device biz
– Outside of games, USJ Super Nintendo World and other efforts are being made to increase appeal to past and future Nintendo fans
– 3DS sales surpassed 66 million
– 3DS software sales are on firm ground
– New 2DS XL and new games like Pokemon UltraSM/3rd party titles on the way
– Nintendo will work to continue the smart device games with new apps; Miitomo, Mario Run, FE Heroes released thus far with different concepts
– Nintendo Classic Mini Super Famicom out in Japan on 10/5, elsewhere in September; designs match what each region got originally
– Nintendo values creativity/originality and will release products that surprise consumers
– Nintendo Dividends: 430 yen/share
– Some talk about election/re-election of board members; Genyo Takeda is not seeking re-election

A1 via Kimishima: It wasn’t just Mario; the aim was to show Japan’s cultural appeal to world through its companies’ characters therefore we accepted request. It wasn’t Nintendo alone. This has several meanings; received positive remarks from around world.

Kimishima: We’re aware there are many PC users. Our unified soft/hardware approach is good. However, we also support smartphones. Thanks to smartphones, Nintendo IPs are recognized, leading to returns on console front. Please see videos of our E3 announcements.

Shinya Takahashi: We were at E3 2 weeks ago with Mario Odyssey. This year public had access for the first time; 50K industry; 15K public. People lined up at Nintendo booth since early morning. Hard to see floor. Last day usually less busy but not this year. People on final day waited for Miyamoto. He also made a surprise appearance at the Ubisoft conference.

Miyamoto: I participated in Rabbids PR/special presentation. Tons of attention towards Nintendo; seems PC didn’t have as much this year.

Q3: There were many NES/SNES games but relatively few for Wii U, which had a short lifespan. Is Switch doing well? I read about Zelda’s 300-person debug team, but I think that’s a very good thing that should continue.

Q4: Nintendo stock is rising. 4 million yen needed for 100 shares. Can you split shares so 100 can cost 1 million yen?

Stock splitting is valid measure, but some stockholders do not view that favorably. We’ll look into it.

Q5: Switch is emphasized as home console co-existing w/ 3DS. But new Pokemon was announced for Switch and I feel the environment has changed. Where do you see Switch/3DS co-existing going? What are your thoughts on the Switch and successor for 3DS co-existing?

Kimishima: Switch can be enjoyed in different ways. No details on Pokemon Switch yet, so please wait for details on what kind of game it is. 3DS will pass 70M this fiscal year and we want to continue providing software for it.

Takahashi: Switch is a unique home console thanks to the Joy-Con. 3DS is already popular, so we will release more games for them.

Q6: (stockholder question about what kind of games Nintendo should make)

A6: iPhone is 10 years old now; there are limits to enjoying games on touch panels. But also no new games recently like Wii Sports/Fit.

Kimishima: 1-2 Switch can be enjoyed without looking at a screen; you look at other player instead. We need to show and surprise users with our software so we can’t discuss what games we should make here.

Miyamoto: Game hardware with adequate features is enough. We released Wii Fit & nintendogs before; I haven’t retired and am overseeing Takahashi.

Takahashi: There are other projects in the works; they’re not necessarily like 1-2 Switch. Can’t announce now but want to show them soon.

Q7: Regarding product video, are there any plans to bring back past content like Kirby anime on BD, or old games on DD for console/mobile?

Kimishima: We’ll look into investing toward film. We want to increase opportunities for Nintendo IP and guide consumers with hardware = software synergy. Regarding Kirby, we’ll take your valuable opinion into consideration.

Miyamoto: We hold the Kirby IP and it’s growing in Europe. It’s selling in Spain; watched in places without game hardware. We want to make anime for Pikmin, Star Fox, Yoshi, etc. and distribute it freely, or integrate into games.

Q8: Looking forward to Nintendo World at USJ. Are there any similar offers from overseas parks?

Kimishima: We already reached understanding with Universal Studios and a US attraction is underway. Miyamoto is in charge of this.

Miyamoto: Construction started on former parking lot; US version progressing too. Olympics coming to JP, so we want to open it here first. I also visit Florida every other month to see the US version.

Q9: Where is the GBA Virtual Console?

Yamato: Looking at ways to develop VC. Classic Mini is one form of VC. We can also sell physical. Looking to make it as big as we can.

Kimishima: We do game demos at Nintendo World NY store; it is a form of marketing. Will look into new stores if location is ideal. We also have Nintendo booth at Kansai Airport, after customs. Enjoyed by many tourists. Want more opportunities like this.

Q11: (translator) Looking at balance sheet, we have 1 trillion yen in cash. How do you utilize that?

Kimishima: There have been technical innovations lately that we need to invest into. We are developing future hardware and software, our IP, mobile, video content, etc. We need to hoard for these investments. And our business experiences high and low cycles and need to be prepared. We give back to shareholders with dividends; M&As are also a possibility.

Q12: Any chances shareholders can get advance tickets or fast passes at Super Nintendo World?

Kimishima: We give to our shareholders through dividends. Shareholders (indiv/corp) want rewards in different ways. Will look into it.

Q13: Monetization differs depending on the game. What methods are you progressing forward with?

Kimishima: We have 3 games (Miitomo/FE/Mario) with different methods. Looking into what works. Mario had 150 million downloads but under 10% monetize. This isn’t bad. Mario downloaded in 200+ countries, some where it’s not officially available. Fire Emblem download count is 1/10th of Mario but has more revenue. All depends on IP; each has different needs.

Q14: Mario will be at Tokyo Olympics. Nintendo characters are part of JP culture. It’s too bad Classic NES was discontinued. There are third party games whose download sales were ended. Will Nintendo stop selling certain games digitally?

Tanaka: Game makers decide for themselves when to stop selling games. Some taken down due to lack of revenue. Please ask each company.

Q15: Nintendo holds shareholder MTG on day other companies do. Makes it hard to attend others. Can you change dates?

Kimishima: Revision in law makes this possible; we’ll look into it for next year and beyond. We want shareholders to give enough time between MTG invite and date; sent invites on 6/7 for one day before the end of month.