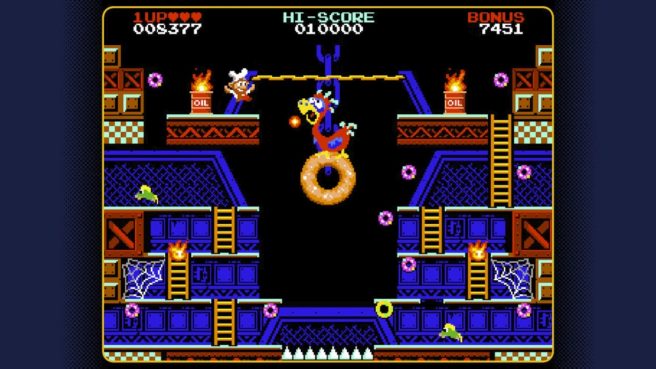 Fresh gameplay has emerged for Donut Dodo. The lighthearted arcade game, from Flynn’s Arcade and Pixel Games, released on Switch this week.

Donut Dodo is a lighthearted arcade game, reminiscent of the beloved early 80’s classics that we still cherish today originally released on Steam back in June. The game is localized in English only, and it has an age rating of E10+.

Play as baker Billy Burns, who has to run, jump and climb to outwit Donut Dodo and his clueless minions. Your goal is to collect all the donuts in each level in the best possible time. Donut Dodo is tough as nails and features no “continues”.

5 single-screen levels plus a bonus stage, each with its own gameplay mechanics.

An old-school screen ratio and pixel-perfect graphics with a 16-color palette.

An original chiptune soundtrack by the talented CosmicGem

Take a look at the Donut Dodo gameplay below.

Donut Dodo is now live on the Switch eShop. English is the game’s only supported language.