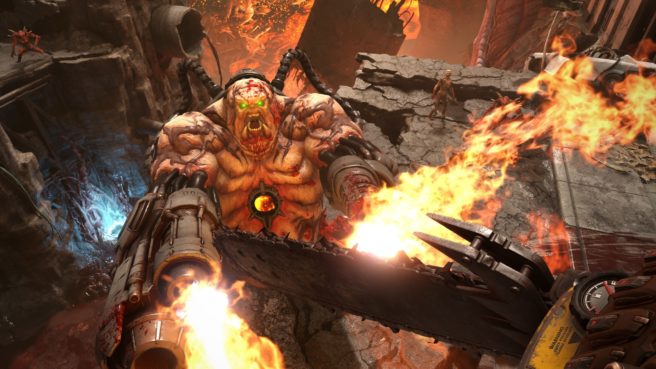 Doom Eternal is a direct sequel to Bethesda and id Software’s Doom from 2016, which came out on Switch last year. Some might be surprised that the title isn’t being called Doom 2. However, there is reasoning behind that.

Executive producer Marty Stratton told IGN that the team considered the name Doom 2, but offered the following explanation as to why Doom Eternal was ultimately chosen:

“You hear us say it all the time, we call it Doom 2016, and the internet has called it Doom 2016. We go back and forth on whether it was a mistake to call it Doom. I still don’t think it was a mistake, because we really were kind of drawing a new line in the sand. …coming out and saying ‘we’re going to do Doom 2,’ we would have ‘Doom 2: Year of Release Date.'”

Stratton added that they sat down with their marketing team to come up with a name “that had meaning and spoke to what we were doing with lore and how we want people to feel about the game. And Doom Eternal was something that just felt right.”

Creative director Hugo Martin had a few words on the topic as well. If Doom 2 was used, searching for the game online would be “a giant pain in the butt, because you get all this [other] stuff.” Christopher Nolan’s Dark Knight trilogy was also an influence.

“I think [Christopher] Nolan did it the best, and we thought about that. It wasn’t ‘Dark Knight 1, Dark Knight 2, Dark Knight 3.’ Each one had its own name, but there was an arc there. They were all connected, as is this game as a sequel to [Doom] 2016.

[Doom Eternal] felt like a good way to go in that regard. You’re not limiting yourself, and you’re also not creating confusion with the brand.”