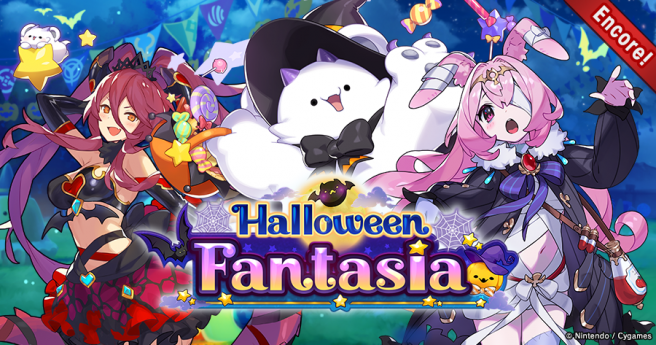 There are some great deals on summoning adventurers/dragons in Dragalia Lost right now. First, a free Hundredfold summon event has gone live for a day, meaning players can perform one hundred summons on a chosen summon showcase for free. Any summon showcase currently featured can be selected to do this but make sure to cash in on it before the promotion leaves on November 4, 2021 at 10:59pm PT.

The Halloween Fantasia summon showcase is also back in the game, meaning that all of these adventurers/dragons are available to summon for a limited time:

Spooky Revival
Increases the entire team’s strength by 25%
for 15 seconds.

6
Deals wind damage to enemies directly
ahead, inflicts poison, and lowers their
poison resistance by 20% for 30 seconds.
This resistance reduction will not stack,
but changing direction is possible during
the attack.
Co-ability

Endurance of the Dead II
Increases the amount of HP the user
revives with by 50% (once per quest).

Poison = Team Strength +10%
Buffs the entire team’s strength by 10%
for 10 seconds upon successfully poisoning
an enemy. After activating, this ability will
not activate again for five seconds.

Charming Trick
Deals flame damage to enemies directly ahead,
and creates a debuff zone that lasts for 10 seconds
and reduces the defense of enemies inside it by 15%.

6
Increases the strength of flame-attuned adventurers
in the team by 20% for 15 seconds, and activates
“Dream Boost” for 15 seconds. During Dream Boost,
the user’s critical rate is increased by 5%.

(Flame) Dragon Haste +20%
If a team member is attuned to Flame:
increases their dragon gauge fill rate by 20%.
Benefits your whole team.

Flamewyrm’s Sweet Nature II
Reduces susceptibility to burning by 100%.
When shapeshifting, Mym will transform into
Brunhilda regardless of what dragon she is
equipped with, and her attack rate while
shapeshifted will increase by 15%.

Draconic Dream II
Increases defense while shapeshifted by 100%.
When the “Dream Boost” effect is active,
adds 20% to the modifier applied to damage
when in dragon form.

Hocus Pocus!
Restores HP to all allies, and creates a buff zone
that lasts for 10 seconds and increases the
skill damage of adventurers inside it by 30%.

(Water) Skill Haste +35%
If the user is attuned to Water:
increases skill gauge fill rate by 35%.