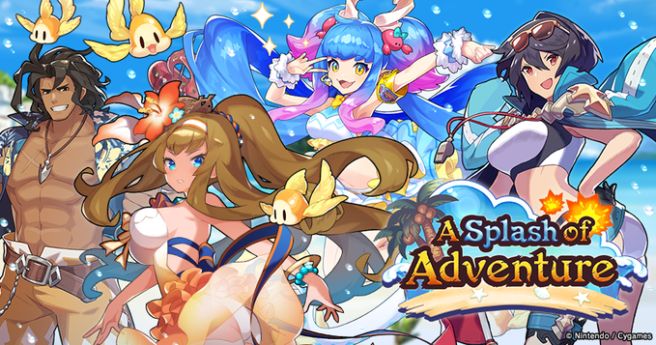 Dragalia Lost has brought back swimsuit-clad adventurers in the summoning showcase A Splash of Adventure. This summon showcase will be live until 10:29 p.m. PT, Jul 27, 2020. Alongside this addition, an interlude to chapter 14 has also been added to the game.

Details of version 1.22.0 have also been released and this update will be available to download on Jul 26, 2020 at 8:00 p.m. PT. The full details of what is included have been included below.

You may install it when it becomes available; otherwise, an automatic update will occur at approximately 8:00PM PT, Jul 27, 2020.

To celebrate the update, we’ll be sending all players a Tenfold Summon Voucher after the automatic update.

This notice will be modified after it has been distributed.

Note: The Tenfold Summon Voucher will not be distributed until after the automatic update, even if you complete the update to version 1.22.0 early.

・Changes to the effects of abilities based on dragon unbinding progress
Starting 11:00PM PT, Jul 27, 2020, the first ability of all dragons will be upgraded based on the dragon’s unbinding progress.
Note: Gala Cat Sìth is the only dragon whose second ability will also be upgraded based on unbinding progress.
We will also adjust each dragon’s might based on their unbinding progress.
・Improvements to certain action elements
The following action elements will be improved.
・We will adjust the force strikes of axe, bow, wand, and staff adventurers so they can be charged and activated while moving. However, some adventurers, such as the following adventurers, as well as adventurers who can use altered or upgraded force strikes, may be unable to charge their force strikes while moving.
Zhu Bajie
Summer Mikoto
Grace
Gala Cleo (only while the Altered Strike effect is active)
Kleimann (only while the Madness effect is active)
Zena (only while the Sacred Logos effect is active)
Nefaria (only while Twilight Arrows is active)
Dragonyule Nefaria (only while Gifts Ready is active)
Hawk (only while Shackling Arrows is active)
Note: The adjustment described above will be applied at 1:00 AM, Jul 28, 2020.
・We will change the attack effect for bow force strikes so they vary based on the user’s attunement.
・We will make adjustments so adventurers who have been knocked to the ground are able to dodge when getting up.
・We will shorten the amount of time players are unable to control the controlled adventurer immediately after using certain adventurer skills.
The affected adventurers and skills are as follows.
Naveed’s Crystalline Blades skill
Lea’s Road to Glory and Floral Revolution skills
Albert’s Lightning Burst skill (including while he is electrified)
Yaten’s Festival Dance skill
Valerio’s Amuse-bouche skill (in Appetizer Stance, Entrée Stance, and Dessert Stance)
Tobias’s Revelation’s Purge skill
Bellina’s Renegade Shadowblaze skill
Lazry’s Smithy Spin skill
Julietta’s Impending Sky skill
Curran’s Circular Judgment skill
Annelie’s Stunning Display II and Stunning Display III skills
Louise’s Arrow Shower skill
Hawk’s Hunter’s Creed II skill
Student Maribelle’s Study Break skill
Lily’s Glacial Blossom skill
Cassandra’s Violet Uproar skill

■Other Changes
・We will adjust the UI on some screens.