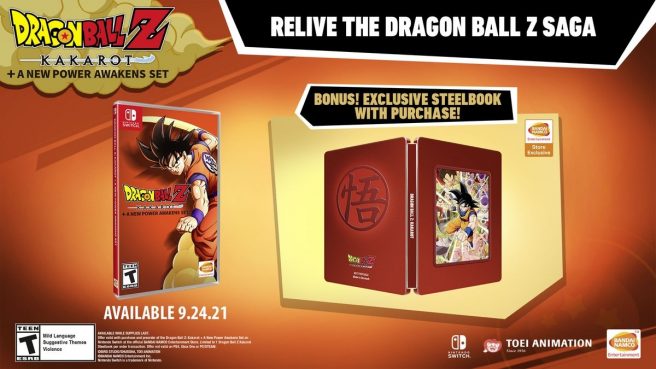 Following up on the previous Japanese version, Bandai Namco and CyberConnect2 shared an English features trailer for Dragon Ball Z: Kakarot + A New Power Awakens today. It offers a preview of the gameplay players can experience as they play through Goku’s life story.

Dragon Ball Z: Kakarot + A New Power Awakens Set features exclusive bonus content from A New Power Awakens Part and 2 where players earn a brand-new power through training and fight Beerus and Golden Frieza. It’s also now possible to select the difficulty level and take part in quests where other Dragon Ball Z characters will become playable. Two new sub-stories are included, and after completing them, Gotenks and Vegito will become playable characters.

Dragon Ball Z: Kakarot + A New Power is due out for Switch on September 24. Pre-orders include an additional sub-story known as “A Competitive Party with Friends”, a cooking item improving players’ stats, ten D-Medals, and early access to the training with Bonyu, a new original character design from Akira Toriyama.

Also as shown above, those that pre-order through the Bandai Namco Entertainment Store will receive an exclusive Switch steelbook. This is not being offered by any other retailer at this time. Pre-orders are open here.