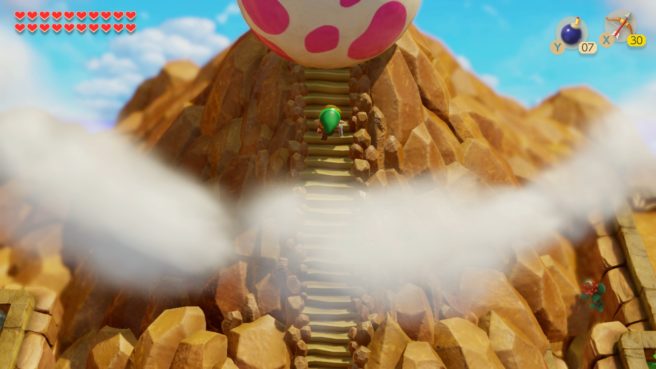 Regarding the sequel to The Legend of Zelda Breath of the Wild, which is still very much a mystery, we are currently diligently working on development, so please look forward to more news to come!

I also appeared on Nintendo Treehouse: Live at E3 2019 to show the first live gameplay of The Legend of Zelda: Link’s Awakening. Please take a look!

The original version of Link’s Awakening for Game Boy is a memorable title for me, which got me interested in The Legend of Zelda series. I wanted to cherish the feeling of exploring this small but deep, immersive world filled with comical characters that I experienced when playing on the small Game Boy screen, so the development team applied a “tilt-shift“ perspective, which really makes you feel like you’re looking into a miniature diorama.

We even incorporated these diorama-like designs into our E3 booth so that those who visited could feel like they were peeking into this miniature world.

One of the new features I talked about on Nintendo Treehouse: Live was the Chamber Dungeons, which is an all-new feature for the Nintendo Switch version.

Fans of The Legend of Zelda might already be familiar with Dampé who appeared in The Legend of Zelda: Ocarina of Time and other games in the series. In Link’s Awakening, Dampé can be found hanging out in some peculiar remains on Koholint Island…

It’s here that you can try out the new Chamber Dungeons feature.

After completing a dungeon in the main adventure, you’ll earn rooms from that dungeon known as “Chambers” that you can rearrange to form a new Chamber Dungeon. Dampé will also task you with arranging dungeons that fit a specific criteria too.

I have wanted to include a feature like this in a Zelda game for a while, but I wanted to keep it simple and avoid making it overly complicated. So instead, we made it a puzzle-solving experience, where players can discover and complete the dungeon they arranged themselves.

Even if you’ve already beaten a dungeon in the main adventure, mixing elements and rearranging the chambers around can lead to some surprising outcomes. I hope you’ll have fun arranging and playing through your own Chamber Dungeons!

Finally, we announced that The Legend of Zelda: Link’s Awakening will release on Friday 20th September!