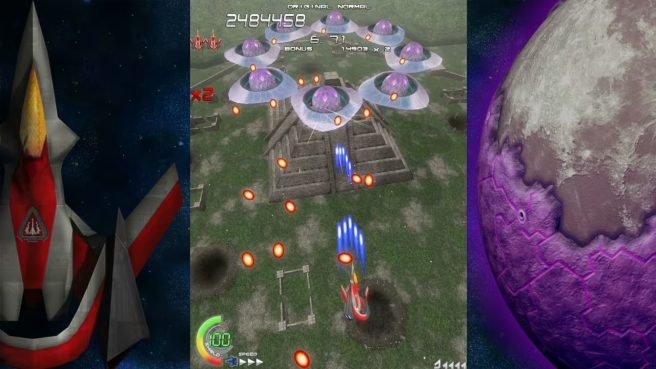 New gameplay has come in for the Switch version of ESCHATOS. After it debuted on the system in Japan late last year, the shoot ’em up title landed in North America and Europe this week.

We have more information about ESCHATOS below with the following overview:

Each segment of the stage is quick, making the game fast-paced and exhilarating. Frequent transitions from attack to rest and back progress the game with rhythm.
No gaps between stages and no data loading wait times – allowing you to play non-stop from beginning to end.

Traditional effects with Sci-Fi theme creates an orthodox world filled with design and characters having a nostalgic feel.

Easy and simple to understand rules! Just “shoot”, “evade”, and “defend”.
Simple scoring and difficulty level settings make it easy for anyone from the first time they play.

Available in “ORIGINAL BGM”, “ARRANGED BGM”, and “REMASTERED BGM” (high-resolution ver. of ORIGINAL BGM).
Enjoy the increased depth of sound while keeping the original FM sound source as a base.

Watch the gameplay for ESCHATOS on Switch below.

ESCHATOS is available digitally for Switch through the eShop. It supports English and Japanese language options.