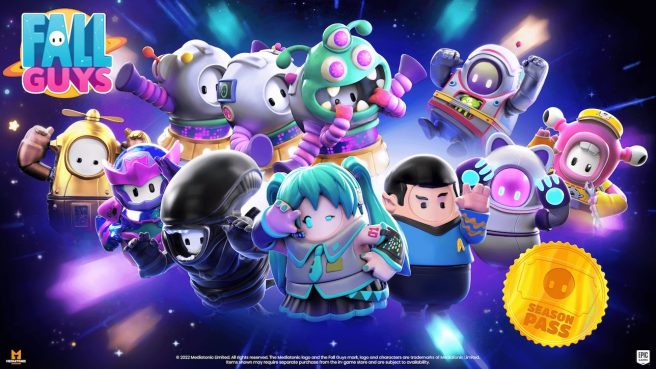 Original (9/12): Mediatonic has announced that Fall Guys Season 2: Satellite Scramble is kicking off on September 15, and we have the full details.

Here’s a breakdown of the different levels:

Tiptoe Finale sees up to four squads, well, tip-toeing their way to victory. You’ve got to be real careful with this one—coz one wrong step could send you tumbling into the cosmos. First to reach the Crown at the arena’s middle, wins.

Take a leap of faith and walk the invisible paths to the end of the race! In Starchart, you have to bump the buttons to reveal the way—but can you read the signals in the stars?

On or off? Pixel Painters has you hopping on tiles to spell out the correct patterns. You’ll need more than a basic horoscope understanding to get the best of this one!

Get ready to travel down the Cosmic Highway. In this Round, players hop across rows of moving platforms. Get your space hopping one inch wrong and you’ll be saying a big hello to the void.

Hyperdrive Heroes is the sequel you’ve always wanted. You gotta stay on your hoverboard and reach the finish without falling off. It just so happens that the hoverboard moves in a circular route. We like to keep you on your toes, don’t we?

This is Hex-a-terrestrial, where players have to navigate floating platforms without a single mistake. Easier said than done when you’re in the midst of SPACE.

Space Race – it’s the Gauntlet, in the stars. Got that, space ranger?

Frantic Factory is the free-for-all cousin of 1v1 Button Bashers. Bash bash bash those buttons to get points! Simpler said than done, right?

Tying in with Season 2 of Fall Guys, a new season pass will be available as well. As part of this, there are costume unlocks for Spock, Xenomorph, and Hatsune Miku! A free progression path will be available for players to earn unlockables as well.

View a trailer for the upcoming season below.

Update (9/20): Here’s a trailer for the Fall Guys Hatsune Miku – Sound of the Future Event: