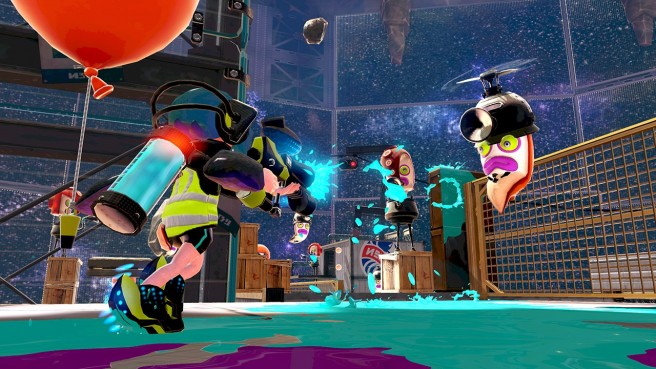 This week’s issue of Famitsu gives us yet another update on Splatoon. In the magazine’s latest article, Hero Mode (single-player) is expanded upon further.

We’ve gone ahead and translated the various tidbits from Famitsu’s article. There might be a detail here and there that was covered previously, but there’s a decent amount of new information.

Head past the break for the full breakdown.

– The number of tentacles of an enemy implies its strength
– Octolings attack in groups
– It is implied they will have rollers in addition to usual guns
– Octopus diver can dive into ink
– Octocopter floats midair so it is harder to hit
– Octopus ball has one eye and spreads ink by rolling around
– Octopus robot is a walking missile
– If it detects the player, it will rush towards him/her and will scatter ink upon explosion

– Jump point: you can perform super jump to change places quickly
– Propeller lift: shoot the fan to move the lift
– Ink rail: you can reach places which would be unreachable in human form by turning into a squid

Yet another Splatoon article will be published in the March 19 issue of Famitsu. The magazine will talk about the different weapons and gear.