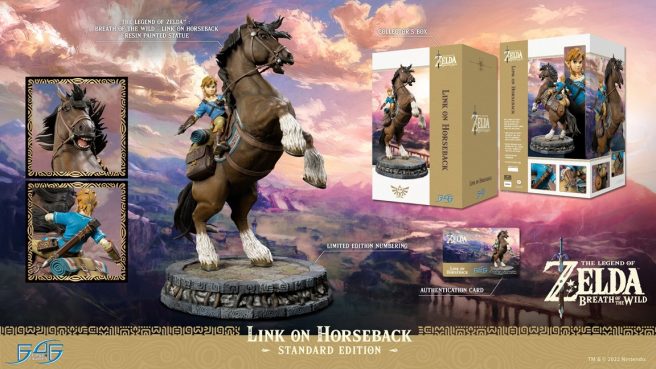 First 4 Figures has revealed yet another statue based on The Legend of Zelda: Breath of the Wild, this time featuring a pose of Link riding on horseback.

“His ensemble which includes his Champion’s Tunic and Hylian Trousers has been realistically textured in gorgeous detail, much like his steed and other elements of this intricate statue,” First 4 Figures says. “Link’s items such as the rucksack, Traveler’s Shield and most importantly, his Sheikah Slate, are also included in incredible detail.” Over on the base, it has stone symbols engraved along the side and vines wrapping around the stone.

First 4 Figures is selling three different versions: standard, bronze, and exclusive. The bronze version has a F4F manual turntable plus “an overall bronze finish achieved through Cold Cast Bronze Technique and a white cultured LED function for the Sheikah Slate.” As for the exclusive edition, you’ll be getting a LED function for the Sheikah Slate plus a detachable Hylian Hood.

Here’s a trailer showing off the Zelda: Breath of the Wild – Link on Horseback statue:

You can pre-order the new statue from First 4 Figures here. It’s quite expensive coming in at over $700, though you can take advantage of a slight early bird discount over the next three weeks.

More: First 4 Figures, The Legend of Zelda: Breath of the Wild