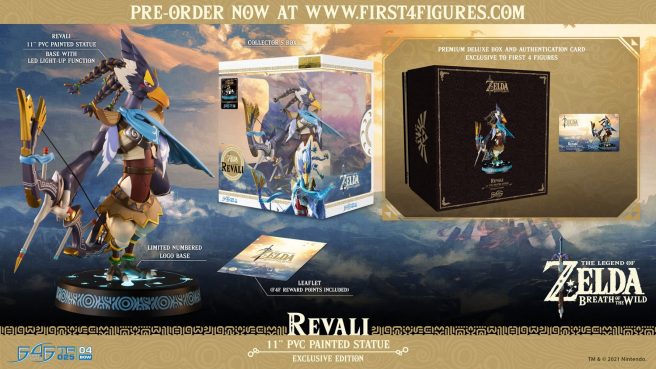 First 4 Figures has created a number of Zelda figures over the years, including designs for Breath of the Wild. The company is now expanding its offerings with the game’s Champions.

First up on the docket is Revali. First 4 Figures statues tend to be quite expensive, though this one can be purchased for $115.

Here’s the official product description and a promo video:

The highly detailed Revali PVC statue is inspired by his official artwork from The Legend of Zelda: Breath of the Wild. Revali is in this stoic pose wielding the Great Eagle Bow, which has a slightly elastic bowstring. As one of the four Champions of Hyrule, he dons the blue cloth bestowed upon them by Princess Zelda as a symbol that they are, indeed, Champions of Hyrule. And given the direction of where the cloth is blowing, it even adds a certain dynamism to the piece.

The design on the base is based on the Sheikah tribe’s eye symbol that appears when activating the Sheikah Slate interface, and the Exclusive Edition of this statue comes with bright LED functions for the base.

With the Exclusive Edition, you also receive First 4 Figures’ beautifully designed signature Premium Deluxe Box that perfectly complements its contents and may serve as a display.

First 4 Figures estimates that it will ship the Revali statue in Q4 2021. Pre-orders are open here.

More: First 4 Figures, The Legend of Zelda: Breath of the Wild