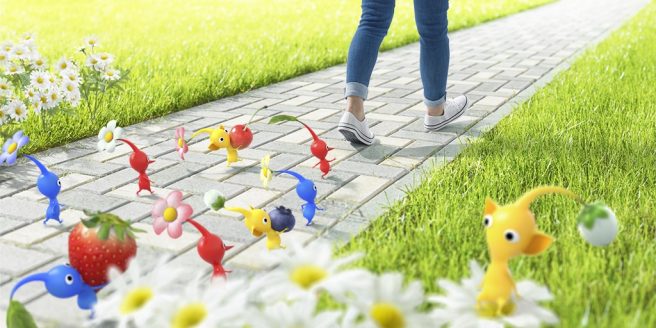 Last week, Nintendo and Niantic announced a brand new app centered around Pikmin. First details have since emerged thanks to a beta being held in Singapore.

Below are the relevant details, courtesy of VGC:

– Currently titled “Pikmin App”
– Begins by giving players several Pikmin Seedlings in an item bag
– Seedlings grow by absorbing Step Energy generated by walking with the Pikmin App and can be plucked once enough energy has been accumulated for growth
– Players can individually name each Pikmin they’ve plucked, or automatically generate one from the app
– Currently seven species to grow: Red Pikmin, Blue Pikmin, Yellow Pikmin, Purple Pikmin, White Pikmin, Rock Pikmin, Winged Pikmin, Pikmin Attributes, Pikmin Flowers
– Can find Decor Pikmin, which are described as “unusual” Pikmin wearing attire associated with the place you found them
– Decor Pikmin are grown from Big Seedling items, or your existing Pikmin may turn into Decor Pikmin by interacting with them in certain places
– As players explore by walking around the real world, they’ll discover new Seedlings and their Pikmin Squad may pick up items along the way, like fruit
– The fruit converts into Nectar, which you’ll give to Pikmin so that they can bloom flowers whose petals you can collect
– Tapping on the flowers allows players to collect flower petals, which they’ll use during a special Flower Planting mode
– Flower petals can come in red, blue, yellow, or white
– Flower Planting is a walking mode that forms flower trails as you walk
– As a benefit, Seedlings are easier to find, and Seedlings planted in your item bag grow faster
– No microtransactions currently
– Expeditions: campaigns where players can send Pikmin to collect Seedlings or other items at places they’ve previously visited
– Choose an Expedition from the Expedition screen, then select the Pikmin they want to embark on that campaign, with the UI indicating which item they’ll collect at the end, the time required and how many Pikmin they’ll need to send
– When you take your Pikmin out for an Expedition, they’ll sometimes pick up Postcards
– These are digital keepsakes that show Pikmin on their excursion, selected from photos of real-world locations submitted by Pokémon GO and Ingress players around the world
– Pikmin App does not use photos saved to the player’s phone, or photos taken by other Pikmin App players
– Currently no function to send postcards to other players
– Lifelog: personal record of the player’s daily activities that they can curate with text and pictures to record things they’ve done
– On the Lifelog’s Entries screen, players can view the number of steps walked, flower planting results, places visited, photos captured and written entries created
– At the end of each day, the Pikmin App will generate a Daily Lookback, which is an animated summary of the player’s Pikmin App progress from the past day, visible only to them
– This summary will include the places you visited, the places where you planted flowers, and the number of steps you walked
– In some cases, if players walked a lot in a single day, they will earn a chance to get a free item by playing a propeller mini-game

The new Pikmin app will debut on mobile later in 2021.