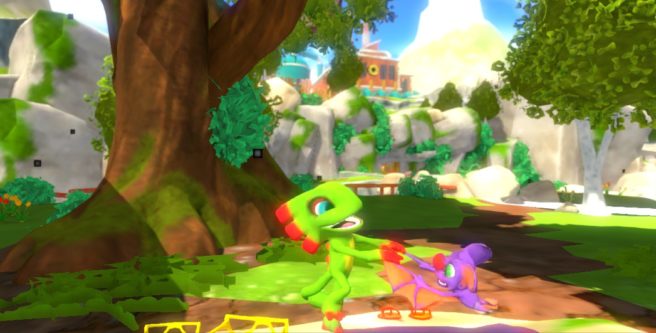 When Yooka-Laylee was funded on Kickstarter, one of the stretch goals met involved was an old-school N64 shader mode. This wasn’t included in the 3D platformer upon its initial launch, but Playtonic will be adding it in soon.

A first look at the shader was posted on Playtonic’s website today. The “demastered” look will be offered through the “64-Bit” tonic.

You may have noticed that we’re continuing to be mysterious and quiet here in the Playtonic dev bunker. That’s simply because we’re all heads down, buzzing like union worker bees, spawning some of the cool stuff we hope to get into your hands in the near future.

And that of course includes the remaining Yooka-Laylee Kickstarter stretch goals, such as the dev commentary series, additional content and the ’64-Bit’ tonic, which we’re working on right now. You can see a work-in-progress (dework-in-progress?) image of the latter below!

In short: we’re alive, we’re listening and we have fun stuff headed your way.

Thanks again for your continued support. There’s lots of exciting stuff going on behind the scenes that we hope you look forward to!

And in the meantime, for those who haven’t joined us on Nintendo Switch yet, Yooka-Laylee is currently 25% off on the Nintendo eShop until July 13! Check it out on the UK store or US store.