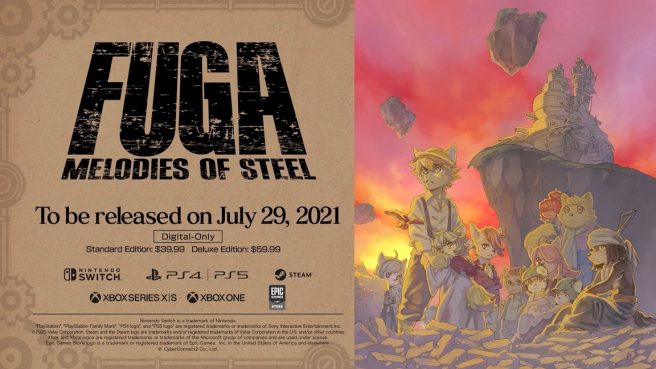 CyberConnect2’s long-awaited turn-based strategy RPG finally has a release date. The game will release for Switch on July 29, the studio announced today.

The story takes place on a floating continent, an archipelago of both small and large floating islands where two species known as Caninu and Felineko live.

Malt, a young Caninu shepherd, lives with his little sister Mei in Petit Mona, a little village located in the Free Lands of Gasco.

Over the course of a single night, the Berman Empire invades and throws the village into the flames of war.

Malt and his friends manage to get away thanks to their families who were subsequently captured and taken away.

Escaping to a mountain cave, Malt and the other children discover a gigantic tank called the Taranis. They jump aboard, heading out on a journey to save their families!

Fuga: Melodies of Steel will cost $39.99 as a standard release or $59.99 for the Deluxe Edition. The latter version comes with a digital mini-soundtrack of music from the game, digital art book, and bonus content: swimwear costumes for all characters, Dummy Soul for the Soul Cannon (can use the Soul Cannon 1 time without sacrificing a character), and a set of items.