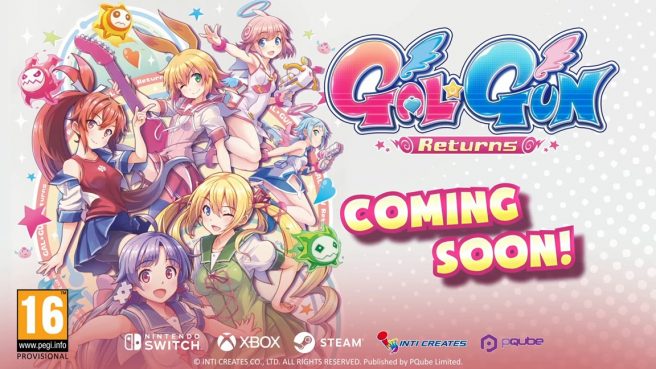 Inti Creates has announced the latest addition to the Gal Gun franchise: Gal Gun Returns. The new game, which celebrates the series’ tenth anniversary, will launch on January 28, 2021 in Japan. It will release in the west at a later date.

Here are the first details and debut trailer:

As the franchise turns 10 next year, what better way to celebrate than to bring to the West the game that started it all but never left Japan, in all its glorious remastered form: Gal*Gun Returns! It’s time for our faithful Gal*Gunners and our new fans alike to experience the roots of Gal*Gun and its numerous undiscovered panties!

Gal*Gun is the entertaining story of a young man who becomes “super popular” with the opposite sex and is now living the “unfortunate” life of having every lady that looks his way confessing their undying love for him.
But he must steel himself and fend these would-be lovers off with his ‘special weapon’ (known as the Pheromone Shot), as he tries to win the affections of one of the main protagonists. Gal*Gun is the crazy combination of arcade-style shooting action and dating sim that truly has no equal.

So much more… for your pleasure

You will face -and romance- a huge cast of over 70 characters! From the heroines to the angels, students to faculty members, and even some ladies who are pretty rare sightings, you have ample choice in which waifu(s) to choose from as your True Love!

While the Pheromone Shots are efficient, everyone has a special spot that makes them weak in the knees… If you aim correctly and see a「ハッ」or「キュン」, land your shot to score a 1-hit euphoric K.O. with the Ecstasy Shot, and get bonus points!

Is your heart beating faster?

The one and only Doki-Doki Mode is back and ready to showcase the girls’ best assets from all angles -should you meet the right criteria! If you get the girl(s) gauge filled-up in the time limit, you will eliminate all the enemies on screen while bringing the girls to euphoria! To top it off, you’ll receive a special reward for your… efforts.

Ten years have passed since the original, and these gals are even more charming now than ever! Small changes such as hairstyles and other fine details have been improved!

Brand new CGs have been added for each heroine’s introduction, and in a bunch of instances throughout the story as well!

The lovely lady below is Kaname Nonomiya, one of the main heroines!

A Variety of Game Modes!

Fall in love with the girl of your dreams in Story Mode, show off your sharpshooting skills in Score Attack Mode, live out your fantasy of a multi-person Doki Doki Mode with the all new Doki Doki Carnival, and a whole lot more!

From bikinis to aprons and more, the popular DLC outfits from back then are ready to be enjoyed from the get-go!

Every single one of the 70+ girls in the game is fully voiced! Revel in every minute of this amazing cast’s performance!

Over 250 illustrations, both old and new, are ready for you to take in!

True aesthetics in those hidden areas is what Gal*Gun is all about!
A grand total of 423 types of panties are waiting to be discovered!
There may even be more to come?!

Gal Gun Returns will be sold physically and digitally for Switch in 2021.