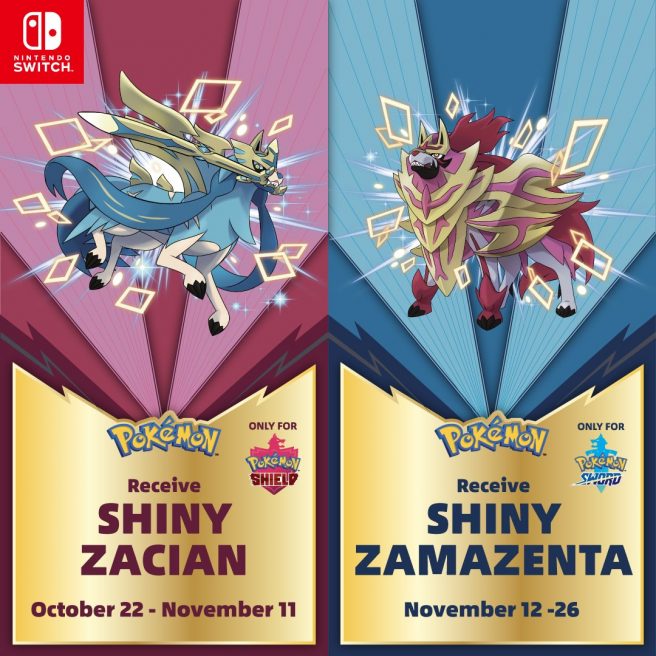 A new Pokemon Sword and Pokemon Shield distribution for Shiny Zacian and Shiny Zamazenta will soon be available at GameStop, the retailer has announced. This will be offered to fans in the United States.

Typically this sort of distribution would be a big deal. However, GameStop casually announced the news on its Facebook page this weekend. As far as we can tell, The Pokemon Company itself hasn’t even mentioned the news, including on its own website.

It’s looking like you’ll not only have to visit your local GameStop not once, but twice for the full Shiny Zacian and Shiny Zamazenta distribution in Pokemon Sword and Pokemon Shield – you’ll get a free distribution code in-store while supplies last. Zacian is up first, with the creature being offered between October 22 and November 11. Zamazenta will then be available between November 12 and November 26. Many of the recent Pokemon distributions have been offered through a simple code that you can input in-game after connecting online, but that unfortunately won’t be the case here.

The last major distribution for Pokemon Sword and Pokemon Shield was for Dada Zarude and Shiny Celebi. Both were sent out earlier in the month. Fans only needed to be signed up for Pokemon Trainer Club email notifications to receive redeemable codes for Dada Zarude and Shiny Celebi, so there was much less effort involved compared to visiting GameStop twice.