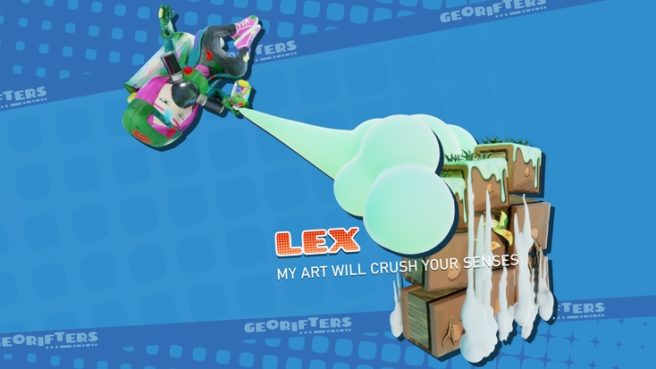 The ground bending platformer Georifters has received a new trailer featuring Lex, an artist that loves to paint.

“Meet Lex. She’s an artist. You wouldn’t understand. Her spray pack is her paintbrush and Paintville, her home Bubble World, is her canvas. We know that she likes to paint and not much else. Unfortunately that is almost all that is known about her on account of her birth certificate and official paper records being mysteriously covered over in pinkish green paint.

Lex is not an introvert nor an extrovert, she is a paintrovert. She really loves to paint. But you can learn more about her lifetime dedication to paint in her upcoming autobiography: 50 Pigments of Pink. Many, however, know her for being laid back, smart, rebellious, and also being the only person to have a 5-year magazine subscription to “New Paints Monthly”. Lex has also been nominated twice for Paintville’s “Hardiest and Paintiest Person” award.

What is also known about Lex is that the giant spray pack she carries around is capable of delivering a powerful explosion of multichromatic paint that creates its own spiraling color vortex that pushes everything violently downward. Let’s just say you don’t want to be in front of Lex when this happens. With this power can she can do a multitude of spectacular things: annihilate obstacles, create platforms, and totally crush whoever she doesn’t want on her Christmas card list that year.”

Watch the trailer for Lex in Georifters below.

Georifters is heading to Switch on September 18. In case you missed it, we have a trailer for Mighty B here.