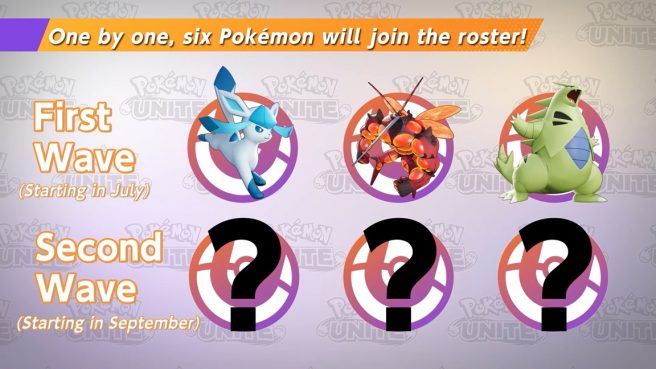 Original (7/15): Glaceon, Buzzwole, and Tyranitar are joining Pokemon Unite, it’s been announced. They’ll be appearing in the game starting on July 21, August 4, and August 16 respectively.

With Glaceon, we know that it will be available to all players by completing the Icy Glaceon Challenge and its missions. Additionally, it will come with two pieces of Holowear.

Even more Pokemon will be following in the future. Three more creatures will be added to the roster in September, though they’re identities have not yet been revealed.

The news about Glaceon, Buzzwole, and Tyranitar in Pokemon Unite comes as the game celebrates its first anniversary. Boss Rush has been announced as a new type of quick battle in which players team up to defeat powerful bosses and earn rewards, the Battle Pass Season 9 and Band Style: Pikachu Holowear have been revealed, and players can receive free Unite licenses and Holowear by logging in. Also announced is the Anniversary Cake Challenge where you can battle and complete missions to collect frosting to build an anniversary cake and earn rewards.

Here’s a trailer for the Pokemon Unite anniversary celebration:

Pokemon Unite is currently available as a free-to-play game on the Switch eShop as well as mobile via iOS and Android.

Update (7/19): We have a trailer for Glaceon in Pokemon Unite below.

Update (8/2): We have a trailer for Buzzwole in Pokemon Unite below.

Update (8/15): We have a trailer for Tyranitar in Pokemon Unite below.