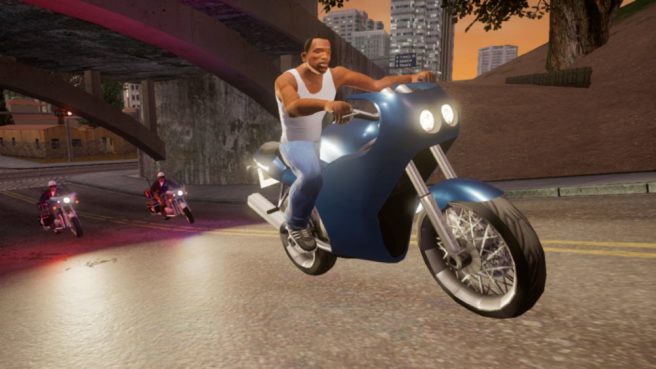 Digital Foundry shared its technical analysis for GTA III: The Definitive Edition last week, and has now followed that up with another video highlighting Vice City and San Andreas that delves into various aspects like frame rate on Switch.

Below is a roundup of some of the more important points:

– More generic color scheme that isn’t close to the original game
– Some new visual upgrades included
– Remastering effort problems are similar to those found in Vice City
– Can more easily see the entire world/map due to draw distance fog/simulation of atmospheric scattering being removed/pulled back
– Water just cuts off at the horizon line without any fading
– Poor rain effect in all of the GTA remasters
– AI upscaled and redrawn artwork like the other remasters; some of it is incomprehensible/has spelling errors

– Switch version lacks ambient occlusion, high res textures, motion blur, shadows under point lights, and interior mapping for rooms behind windows
– Draw distance pulled in on Switch, especially for shadows
– Typically 648p when docked
– Resolution tends to hover around 504p in portable mode for San Andreas
– Around 600p in portable mode for Vice City
– GTA: Vice City and San Andreas frame rate is targeted at 30 FPS on Switch
– Frame rate drops to low 20s in both Vice City and San Andreas
– Frame rate tends to stabilize a bit when standing still or moving slowly
– Frame pacing is an issue with both games on Switch

You can watch the full technical analysis for GTA: Vice City and San Andreas below.