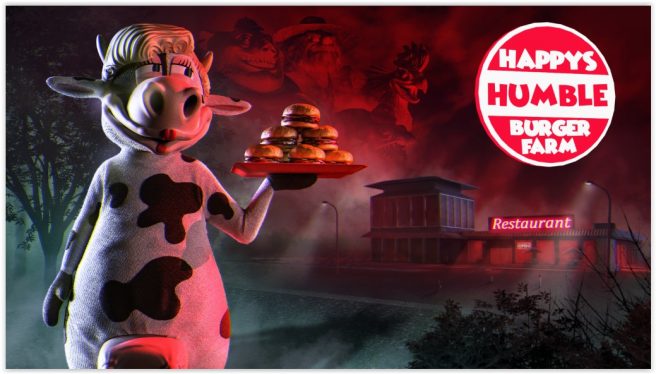 Happy Humble’s Burger Farm, a horror adventure cooking sim game from publisher tinyBuild and developer Scythe Dev Team, has a new release window on Switch. It will now launch on the system in early 2022.

Happy Humble’s Burger Farm was announced for Switch in September with a Q4 2021 release window. Most platforms will be getting the game on December 3, though the Switch version won’t be ready to go until the start of next year.

The alarm goes off. It’s a brand new day but… You have no memories, just an incessant thought reminding you to report to Happy’s Humble Burger Farm night shift. Grilling burgers, frying nuggies, and baking cookies sound like an easy enough task until creepy things start happening all around. The mascot Barnyard Buds statues moving by themselves, lights turning off out of the blue, and doors that can’t seem to keep shut are just the beginning.

Block unsettling occurrences out of mind by fulfilling orders and managing the entire restaurant. Complete the daily duties from the board, get rid of live rats, unclog toilets, put out literal fires, and beware of the demon-like figures trying to mess with your shift. Above all else, stay away from Happy the Humble Heifer–commit enough infractions and the merry cow becomes an evil beast ready to tear you apart.

Keep your distance from Happy exploring the streets and storefronts of grand ol’ New Elysian City to uncover the secrets of the Happy’s Humble Burger Farm franchise, Obscura Biotech, Paragon, and your very existence. Collect tapes and research pages scattered around town to piece together the mystery behind your memory loss. The city’s buildings hold more than just cardboard figures, and the gargantuan Petey the Portly Pig blowing up explosive Poppin’ Pork sandwiches is just the beginning of a never-ending series of nightmares… And you’re stuck on repeat.

Happy’s Humble Burger Farm is an immersive psychological thriller experience featuring ‘90s style graphics, over two hours of talk radio, more than 60 TV programs, and a chilling soundtrack composed of 14 albums, with nine recorded exclusively for the game, all playable from the restaurant’s interactive jukebox.

A new trailer for Happy’s Humble Burger Farm can be found below.