Impressions from Day One at E3 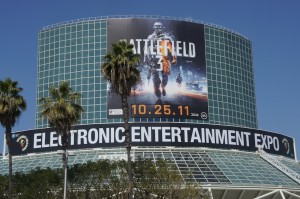 After arriving at the Los Angeles Convention Center in downtown LA with Laura via bus, Austin, Laura, and I walked into a gigantic line, which we presumed to be the line to determine your place in line for the major company’s demo booths. Since waiting in line is a bit less fun than eating, we decided to check out the media hospitality room to grab some free grub. Unfortunately, we were greeted with another line, and after a thirty minute wait while chatting and taking photos with a cool dude from XboxPulse.com, we received some filling chicken sandwich meals.

Once we got done stuffing ourselves with free food, we hopped on over to the enormous West Hall to see all that Nintendo had to offer. Austin was the only one of us who got to see the Nintendo press conference in person (or at all, for that matter), and since I had been busy getting to the convention center earlier that morning, I had only heard secondhand reports of the goings-on in the Nokia Theater at that point. I was very excited to see the new system in person, to demo all of the announced 3DS games, and hopefully to put my Skyward Sword fears to rest. Once again however, there was a monstrous line waiting for us, so monstrous that we were unable to get hands-on with the freshly christened ‘WiiU’ that day (you’ll be able to see the six hour line in all its glory in That One Show: Episode 17). 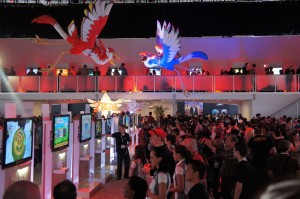 Thankfully, Nintendo had much more to offer on its grandiose show floor (“show castle” would be more appropriate) than just WiiU games. Austin and I proceeded to the ground floor to get in line to play Skyward Sword while Laura went on the raised floor next to the Wii area to try out all of the numerous 3DS demos. While waiting in line, one of the booth girls had us try out some Kirby Mass Attack, a DS exclusive that I’d never heard of before. Featuring intuitive, touch-only control and a crisp art style, Mass Attack was a nice surprise and will be a likely addition to my DS library this coming September. Kirby Mass Attack has gameplay similar to Overlord, Pikmin, and Little King’s Story, only sidescrolling instead of being 3D; rapidly tap enemies to attack them, draw a circle around your group of Kirbys to roll them into a big ball that can be directed through the air, and flick Kirbys to break through any obstacles and enemies you might encounter. For some inexplicable reason that will be much clearer in the upcoming months when more details are released, some Kirbys that were originally pink came back blue after they died; the blues didn’t appear to garner any special abilities after death. I couldn’t figure out any other abilities since the text was in Japanese, but I expect there to be much more.

After winning a game of Rock/Paper/Scissors to play The Legend of Zelda: Skyward Sword first (Rock always wins it for me for some reason), I finally had the chance to play the successor of what has to be my favorite franchise in all of gaming (until ShaqFu 2 comes out). However, despite my love for the Zelda series, my expectations weren’t high; I was worried about having to constantly recalibrate Wii Motion Plus, and both Spirit Tracks and to a much lesser extent Phantom Hourglass were disappointments that made me lose a bit of confidence in Nintendo EAD 3. Fortunately, my fears were put to rest, as Skyward Sword delivered for the most part. I chose to play the dungeon demo as opposed to the boss battle or flying demo, so I got to see the meat of the game. Combat was the same Z-targeting scheme we’re all familiar with; pressing A while moving dodges, and a swing of the Wii remote unleashes your sword attack. This is, for better or worse, probably the slowest moving Zelda in terms of combat so far, but it is still quite smooth. Wii Motion Plus was fully incorporated into the scheme of things; enemies would shield one side of their bodies, leaving the other open for striking. Wii Motion Plus really requires you to swing your arm to be effective as opposed to lazily swinging your wrist like I did, so keep that in mind. Thankfully, my biggest fear about the game is gone: calibrating WM+ is as simple as pressing down on the d-pad. Crisis averted. 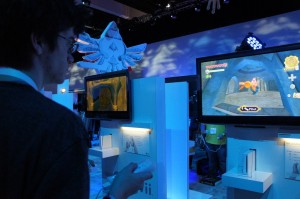 Gone from the gameplay is the familiar ‘HYAA’ roll; holding A while away from combat now makes Link run, complete with a stamina bar. I found the graphical style to be a mish-mash of Twilight Princess with some of the cel-shading found in Wind Waker; it looked pretty nice, but it didn’t sweep me away like the other 3D Zeldas did aesthetically. Bombs are now accompanied by a transparent arc that makes them exponentially easier to aim and fire. The new beetle item, controlled in similar fashion to the birds in Super Mario Galaxy 2, was pretty fun to utilize, and should be a great addition to the game. All in all, Skyward Sword relieved me of my fears, and while I don’t know if it will be on the same level as the previous four 3D Zelda titles, it will nonetheless be one of the top games of the year on any console.

After finishing up with Skyward Sword, Austin and I headed up to the 3DS area. The first stand we checked out featured Mario Kart 3DS, something I was very eager to play since Mario Kart DS is probably one of the five best DS games I’ve ever played. Of all of the games I’ve played on the 3DS, Mario Kart is the one that benefits most from the three dimensional effect; it was exhilarating blasting through one of the game’s colorful introductory courses, which emphasized an awesome underwater segment that didn’t add much technically speaking, but was gorgeous to look at nonetheless. Other than that, the gameplay felt pretty much like every other game in the series aside from the Double Dash outlier, but that’s just how it should be; it’s wise not to fix was isn’t broken. Mario Kart 3DS was probably the highlight of the time spent in the 3DS section.

After Mario Kart, I walked up to a reimagining of an old favorite of mine, Star Fox Six-hundred and Forty-three DS. I only had a chance to try out the multiplayer, so I couldn’t see if they kept the lovable old voice clips from the original in the campaign. It was just as fun as it was on the 64, despite the control being a bit too sensitive. Enhancing the experience was a cool new feature that mapped a constant photo of your face via the inner camera on the 3DS on the screen where the faces of Fox, Wolf, Pigma, etc. would normally be. It sounds minor, but it added a lot of fun to the experience. The graphics looked incredibly nice as well. 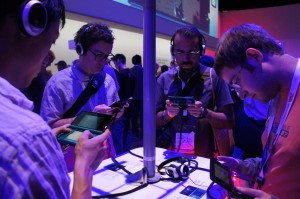 Next on the gaming agenda was Metal Gear Solid 3: Snake Eater, of which the first level was playable. The pixilation was pretty much on par with the PS2 original, despite the frame rate dropping a bit. While the control wasn’t as (and shouldn’t be expected to be as) good as on a Dualshock 2, it was good enough; ABXY controlled the camera, the d-pad dealt with weapon selection and crouching, L took aim, and R fired the trigger/laid out a fury of punches and kicks. The game is much better suited on a big screen with traditional control, but the 3DS offers a “solid” port of this 2004 classic.

Up next along the front row of the exhibit, which would turn out to be the last game I would play in the Nintendo 3DS section, was Super Mario. Having only seen vague screenshots before, I didn’t know what to expect out of this next chapter in the traditional Mario series. The level I played was in 3D and felt very Mario Galaxy-influenced, with course-like platforming across disappearing blocks. The control was pretty much the same as its been since Mario 64 came out, but felt a bit less tight than previous iterations have on home console controllers, probably because running was controlled via the X and Y buttons a la Super Mario 64 DS instead of being control stick-sensitive. The long jump, ground pound and backflip were still part of Mario’s parkour arsenal, but the double jump, triple jump, and ever-satisfying side somersault were MIA. Mario did utilize a new tactic however, a roll, via the R button. In addition, the Tanooki suit was playable, and though it wasn’t as well-implemented as it was in 1989, it felt really cool to tail whip enemies in 3D. Overall, the game looked really creative, and should be one of the 3DS flagship titles.

After leaving the Nintendo floor, which unfortunately didn’t have a playable demo of my most anticipated 3DS title, Intelligent System’s Paper Mario 3D, all three of us went to get more nourishment. I got some Vitamin Water, and Austin got some nasty blue Monster Energy after he almost fell asleep at the table we were sitting at. Since we’d been at the Nintendo booth all day, we decided to check out the enormous South Hall, which housed the bulk of the event. Upon entering, we were greeted with the introductory cinematic of The Old Republic on a giant screen near the entrance, which looked fantastic. Laura went to go try out the Sims 3: Pets while Austin and I walked around. 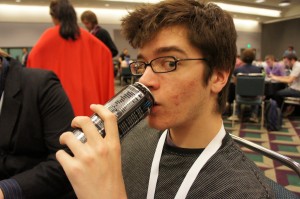 Our first stop was at the Sega booth (which had a banner of the glorious Sonic Adventure 2) to try out yet another 3DS game, Sonic Generations. Aside from the underrated Sonic Colors, Sonic hasn’t had a real standout title since the days of the Dreamcast (or Genesis, depending on your viewpoint). At first, Sonic Generations seemed like another disappointing title. I played a reimagining of Green Hill Zone Stage One, and felt no magic, nothing to make me want to play it further. The 3D effect didn’t really improve the aesthetics at all; I actually preferred the stylings of the original Sonic the Hedgehog greatly. After beating the first stage, I let Austin have a go, expecting him to feel the same disdain I felt; instead I heard pangs of interest. Soon, he was telling me to give the second stage a go, and it was like night and day. Cinematic sections of levels (specifically around loops) missing from the first stage added a lot of flair to the experience, and the new metered dash technique present in some of the newer Sonic games like Colors made things a whole lot smoother and faster, at possibly the cost of the pacing of the original game. It’s an excellent mixing of old and new, and while I wouldn’t say it’s a true return to form, it’s a nice breath of fresh air.

We walked around the South Hall for a bit longer, met up with the cool guys at CM4 (makers of some real nice 3DS cases), and then headed back to the hotel room. It was a tremendous day, and I strongly look forward to playing demos of Catherine (my most anticipated game coming into E3), Kid Icarus, Luigi’s Mansion, Vindictus, and of course the Wii U, and telling all of you NE and GE readers about them tomorrow. See you then. 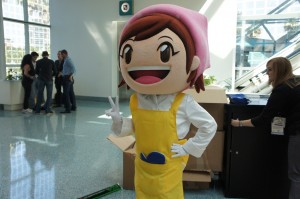