Itagaki on the lengthy development of Devil’s Third, getting the game on Wii U, more 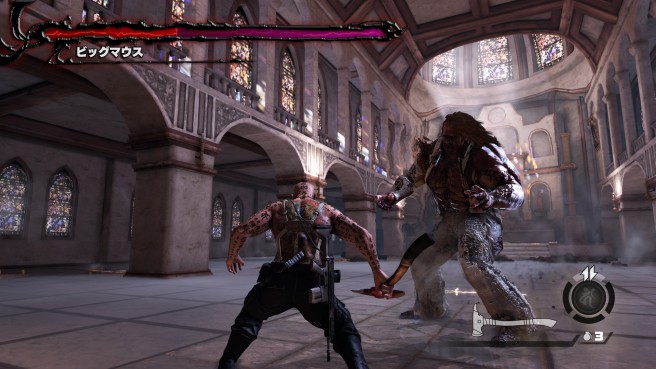 Famitsu interviewed Valhalla Game Studios’ Tomonobu Itagaki in one of its recent issues. Today, Itagaki posted the entire transcript in English for all to see.

We’ve picked out a few highlights below. Those include the game’s lengthy development, the process of getting the game on Wii U, and more.

On what he set out to do with Devil’s Third…

…I’ve made an A-class action game already with Ninja Gaiden, and DEAD OR ALIVE ranks up there with Tekken and Virtual Fighter; so when I became an independent developer, I started thinking about what kind of game I wanted to make. I thought it’d be pretty boring to make another fighting game or another hack-and-slash—life is short, you know? [laughs] I decided I wanted to challenge myself in another genre. I had a really strong desire to make a completely new type of game. Sort of . . . a culmination of all my games up until now.

…you can play it as either an action game, or as a shooter. In the end you’ll probably end up playing it as both. But for now, players can play it in whatever style they want. It’s wide open like that. I’d love for Ninja Gaiden and DEAD OR ALIVE fans to play it. I say action, but it’s actually a shooter with strong action elements.

On researching other shooters…

As far as shooters go, I’m still in elementary school, so I had to do a lot of research on shooters from other studios. We looked into them in really fine detail—what’s the cursor like, what’s the crosshair like, et cetera. We had to play around with a lot of really fine dials. But there are a lot of those details, and they quickly add up and build on each other. Just stuffing a ton of elements in doesn’t mean the player is going to have a good time though. That’s why controllability is important.

Normally, trying to put everything in just makes it all a mess, but we were able to fit it all in Itagaki-style.

On the long development period…

You are exactly right, really. We’ve been underground developing for 7 years now—it’d only be natural for people to forget.

After we announced it at E3 last year, we had a lot of feedback from users such as “Can’t you improve the graphics?” or “Can you buff up the animations?” After last year’s E3, we spent about six months on really intense polishing—especially the graphics and controls—and just making it just cooler visually.

On how Devil’s Third ended up on Wii U…

As to how Devil’s Third ended up being released on the Wii U: I visited the Nintendo offices, and explained to them that I had a game.

That’s right (he went to Nintendo himself). THQ, who we originally intended to publish the game with, went through what it did. After that, we visited the Nintendo offices and explained, “This is the game that we have . . . Well, this is only what we have.” [laughs] We showed them our documentation and visuals, the gameplay—we showed them everything we had at that point, and gave a proposal. Their people in charge—beginning with President Iwata—said, “Let’s do it.” This is just my assumption, but I think the reason why he said, “Let’s do it,” is because a varied lineup of titles is necessary for any hardware. I like to think the staff at Nintendo—beginning with President Iwata himself—felt the possibilities in our game to be a new type of shooter, a new type of action, a new type of game.

We started the title with THQ, and Nintendo came in with development already underway; so it wasn’t really possible to make any sweeping, fundamental changes. With that said though, Valhalla did have a lot of pretty heated back-and-forths with Nintendo like, “We think we should go with this,” or, “Don’t you think it’d be better like this?” [laughs]

I’m getting a little ahead of myself, but Mario Club was amazing. [laughs] They are really intense.

We got a lot of feedback. Everyone was really positive and enthusiastic. One thing we ran into though is that there really haven’t been any other titles from this type of genre—not specifically the Wii U, but titles like this coming from Nintendo itself. There aren’t any previous examples, so the standards weren’t really defined. While our staff was developing Devil’s Third, we were setting targets trying to push the Nintendo hardware as far as possible—overcoming obstacles one by one . . . or sometimes going around them. [laughs] Then we’d get into discussions with Nintendo like, “This is how far we’ve come, let’s keep going,” to which they would respond, “Well, we know you want to . . . .” Then we’d say back, “Then let’s do it!” and in the end, Nintendo finally told us, “Alright then, do it!” (laugh) We’re mercenaries hired to win the battle. Mercenaries working together to win.

More than that—and I’m not being patronizing—Nintendo is trying to change itself on a large scale. The way I see it is that we were entrusted to help with one small part of that change. For example, with things like online multiplayer, Nintendo is trying to break out of the paradigm they’ve held for so long by exploring all kinds of new angles; and as our part in that plan, we were to make a completely new type of game—something that Nintendo had never made, that wasn’t in their portfolio. In the beginning, they were telling me, “This isn’t very Itagaki-esque. We want it more Itagaki-esque.” That’s how much they were saying, “Do it!”

On how the game has a lot of save points, and they’re auto-saves…

I can’t say there won’t be any places where you’d say, “Where’s the save point!?” but there probably won’t be. Anyway, we’ve set it up in the modern style, so you can always be progressing forward. And we’ve evolved it a bit.

After so many years, your game design philosophy changes—even mine. So if we were going with an auto-save system, I didn’t want to deal with that suffering. [laughs]

That’s why we implemented a diplomacy chat. Of course, if all the members were participating, it’d be impossible to follow; so that’s why it’s limited to just generals [the highest-ranked clan member], and captains [officers]. As the clan grows in size, the number of captains it can appoint increases, and captains can begin and engage in diplomacy chat themselves. There are a lot of things they can do—not just diplomacy, but managing and discussing internal affairs, et cetera. Generals and captains from multiple clans can also join in large meetings. Just like a top-level summit. So, chat is a really important part of the game. It can be used to discuss strategy: “We’re going to launch an offensive against this clan this day of this month, so we’ll need you to do so and so.” Sounds fun, doesn’t it?

Well, solo-play is full of what makes an Itagaki game; so people who want to enjoy an Itagaki game will have to give it a go. Oh—and this kind of relates to why the game took so long to develop—there are games that lean specifically towards multiplayer, and there are games like Ninja Gaiden that are specifically solo-play. Both types of games are definitely worth playing, but both need a certain amount of content and quality on a certain scale. Anyway, what I’m trying to say is: Devil’s Third is two full games worth of content in one package. If you ask me, you can’t call something that ends in 5 hours a real solo-play mode. And I think it’s presumptuous to call something a real multiplayer mode when it seems it was just something tacked on at the last minute to a mainly single player game. So for Devil’s Third, if you are only interested in the solo-play mode, that’s completely fine. If you aren’t interested in military or politics, you’ll still be completely satisfied playing it as a standard shooter. But the Devil’s Third battleground is full of surprises! [laughs] Anyway, I think we’ve really widened the door for people to enter the shooter genre, and made it easier for casual players to really have a good time; so I’d really like everyone to enjoy both solo and multi. It really does have two full games worth of content—in our case, I think 1 + 1 = 3. [laughs]

Well . . . If we had given up, then we wouldn’t be able to show our face to all the people that had supported us up to that point. There wouldn’t be any opportunity for us to work in this industry anymore. That’s just how it is. We developed Ninja Gaiden in 4 years, and that was with us developing multiple lines at the same time, so it’s not a particularly long time. Our desire was to complete the game by any means while establishing our company structure, developing the game itself, and keeping the company going all at the same time. We were finally able to make it through thanks to Nintendo who really made it all possible along with everyone in the industry, and also thanks to the expectations from all the fans and gamers that were waiting. With all that support, I couldn’t be someone who would drop it all and walk away. That’s one part. And on top of all that, we had already made the decision to make the game. We brought in staff to execute that decision. Those staff, their families . . . I’m repeating myself, but all of our fans . . . I couldn’t just betray them. “So you did it just as some personal responsibility?” No, it’s not like that either. You know, sometimes if I’m speaking with someone, they’ll tell me that I’ve changed. Establishing my own company, I’m pretty much free to do what I want, and I’m also solely responsible for what I do. It can be a pain sometimes, but at the same time it gets you in the mood to just get it done. So as I said before, for all the support we’ve received in every form imaginable, and for letting me introduce Devil’s Third like this here today, I’m incredible grateful. Like I said in the beginning, it’s a culmination of everything so far—not just mine, but of everyone that works here. Please try it for yourself. I think it’s going to be a breakthrough for the industry. I believe it’s going to take shooters to the next level.