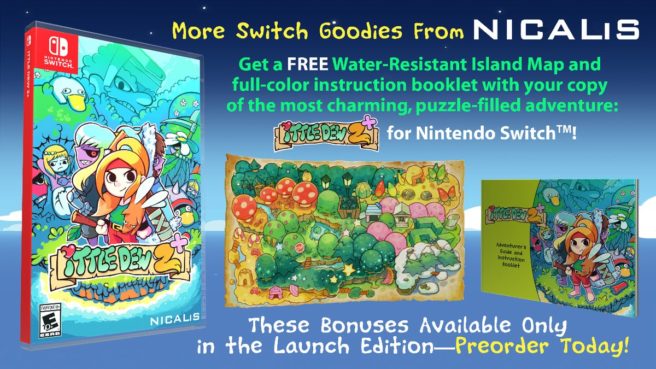 Nicalis has announced a release date for Ittle Dew 2+, one of the publisher’s next games for Switch. The “puzzly adventure” is scheduled for November 14.

Here’s an overview of Ittle Dew 2+:

“Continuing the saga of sassy adventurer Ittle Dew and her deadpan sidekick (the flying fox named Tippsie), Ittle Dew 2+ is a sprawling action-adventure game that takes place entirely on a mysterious, faraway island. Left stranded on the shore after their raft breaks, Ittle and Tippsie explore the terrain in search of treasure, weapons, puzzle-solving tools and the eight scattered pieces of another raft that can allow them to escape the island.”

Ittle Dew 2+ will be sold physically and digitally for $29.99. The initial print run will include a copy of the game, a full-color instruction booklet, and a limited-edition map of the island. According to Nicalis, “The map is printed on tear-resistant and weatherproof synthetic paper that has been specially formulated to endure the rigors of the island’s hazards and unpredictable storm patterns.”