Iwata on Wii U sales, including Mario Kart 8 and Smash 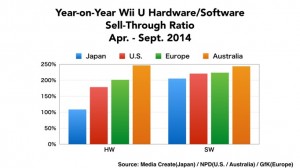 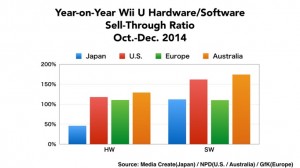 We showed a graph at the Corporate Management Policy Briefing to indicate the growth of the Wii U hardware and software sales in the first half of this fiscal year over the corresponding six months a year ago in Japan, the U.S. and in Europe, and this is the same graph but with the data from Australia.
The sales figures of both hardware and software improved due to various reasons, such as the release of “Mario Kart 8” in May and the re-evaluation of the Wii U platform after E3 in June. The strong growth in Australia can be mainly be attributed to “Mario Kart 8” released in May just before Australia’s unique June-July winter sales season, known as the Toy Catalogue Season.

We shipped 4.77 million units of “Mario Kart 8” worldwide as of the end of the last calendar year. I can say it marked a very high attach rate if we consider the current installed base of Wii U hardware.

Following the Nintendo 3DS version, we released “Super Smash Bros. for Wii U,” which had shipped 3.39 million units by the end of last year.
As these two classic multiplayer franchises for Nintendo consoles were brought out together,

As you can see, the year-on-year comparisons of software sell-through sales in the October-December period show increases in all regions. They especially improved in the U.S. market. We can see larger improvements if we make comparisons among Nintendo titles, especially in the overseas markets.
This is not directly related to this graph, but if we look at the sales figures of only Nintendo titles just in the U.S. for the full calendar year of 2014, the total figure of retail and digital sales represents 175 percent of those for the previous year.

On the other hand, hardware sales increased smoothly in overseas markets but decreased in the domestic market. Our analysis of this situation is that in addition to our offers not attracting consumers in the same way as the Premium Family Set bundles did in Japan in 2013, New Nintendo 3DS gained more attention than Wii U, many of the big titles were released for Nintendo 3DS to encourage younger consumers to choose multiple Nintendo 3DS titles, and the priority of purchasing the Wii U console decreased.