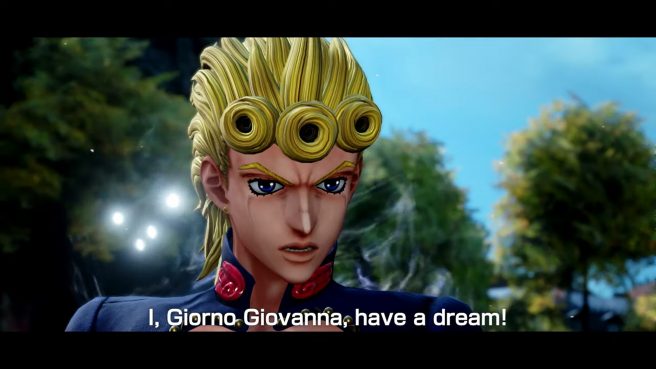 Bandai Namco has set a release date for the new Giorno Giovanna DLC in Jump Force. Players can begin using the character starting on April 13. Note that Characters Pass 2 owners will have early access on April 9.

For a recap on Giorno Giovanna, check out the following overview:

A Golden Wind is set to howl across the Jump Force battlefield when JoJo’s Bizarre Adventure‘s Giorno Giovanna, the progeny of DIO by way of Jonathan Joestar’s body, joins the game’s playable roster this spring. Opponents who come face-to-face with Giorno’s seemingly invincible Gold Experience Requiem Stand are forever reminded that their attacks are simply useless.

Giorno is the fifth and final member of Jump Force “Characters Pass 2,” which also features the currently available Shoto Todoroki, Meruem, and Hiei, and the upcoming Yoruichi. Players who purchase Character Pass 2 for $17.99 will immediately obtain Todoroki, Meruem, and Hiei, as well as gain early access to Yoruichi and Giorno upon release. Each character is also available separately for $3.99.

We’ve included a couple of videos for the character below.