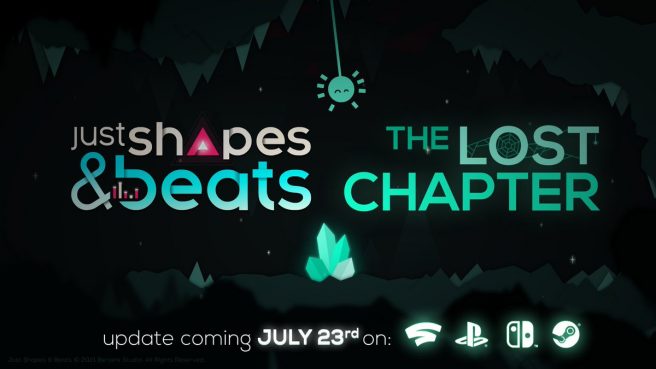 A brand new update has just arrived for Just Shapes & Beats, known as “The Lost Chapter”. All players can access version 1.6.0 on Switch now.

Just Shapes & Beats, the highly acclaimed musical bullet-hell from Quebec-based indie developers Berzerk Studio receives a new update today that completes the initial full vision for the game’s story mode. This update contains a previously lost chapter to the story-line that could not be included in the original release for reasons. With the inclusion of The Lost Chapter, fans can now enjoy an expanded story-mode playthrough with 5 new tracks, including an all-new boss fight set to a remixed version of Spider Dance from Undertale.

The 5 songs include a mix of well known artists and newcomers to the roster of contributors to the game such as F-777, MDK, Kommisar and Shirobon. Written specifically for the update, Shirobon’s Remix of Spider Dance, from the cult favorite Undertale, will serve as the music for an all-new boss fight.

As with all previous updates to the game, owners of Just Shapes & Beats will receive The Lost Chapter for the additional low low price of nothing, able to be unlocked upon launch.

– The Lost Chapter: A new chapter of the Just Shapes & Beats story mode, complete with 5 new tracks and an all-new boss level.
– Featuring a Shirobon remix of Undertale’s Spider Dance track, custom-made for this update.
– Exclusive new track from MDK – Interlaced
– Update is free to all owners of the game, and included in all future purchases of Just Shapes & Beats.