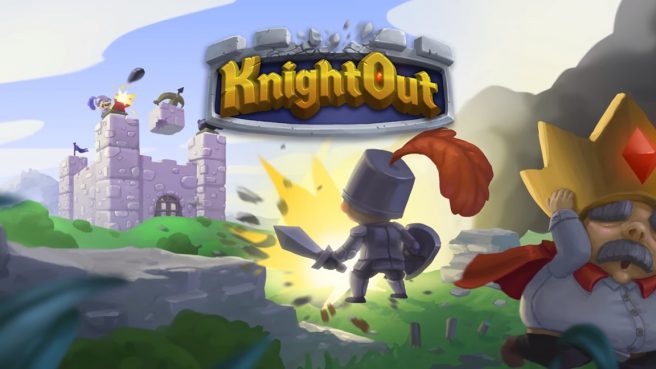 A game title that may come to mind is KnightOut. We first reported on the project way back in 2017, and at the time, it was funded through Fig. Although we haven’t had much to share since then, it turns out that the game is just a few days off.

2nd Studio has announced a final release date for KnightOut, confirming will be ready to go on June 3, 2022. We’ve included some additional information below.

Other than announcing the June release date for KnightOut, 2nd Studio has also published a new trailer. Give it a look below.

Battle:
Each game starts with both teams building a castle outfitted with cannons. Then, all hell breaks loose! Cannon balls fly, stone walls crumble, and your knight takes to the turf, slashing his sword. Once you’ve destroyed your opponent’s base and K.O. the king or queen inside, you win the round. You need three K.O.s to win the match. After each round you can rebuild your castle.

Story:
Play through several levels and defeat enemies as you expand your arsenal. This game mode is singleplayer or co-op. You will start your adventure in Braal Kingdom and travel through other kingdoms as you gain cupcakes after each level to unlock new worlds. It features a cute story with immersive cinematic cutscenes.

Arcade:
Defend your castle against waves of enemies singleplayer or in co-op with your best friends. The enemies will drop gold as you defeat them. Gold can be used to upgrade your castle after each wave of attacks.

Features:
– 1 to 4 player battle – Play against or with your friends in local multiplayer
– Build a massive castle – Use your creativity to build your own castle
– Fight in melee combat – It’s easy to learn yet hard to master
– Raise your arsenal – Build different weapons and defenses with 16 items to choose from.
– Original soundtrack by Mike Raznick (Rachet & Clank, Oddworld: Abe’s Oddyess – New “N” Tasty)
– A stylized vibrant art style
– Tons of flashy unlocks

KnightOut will cost $14.99 on the Switch eShop.