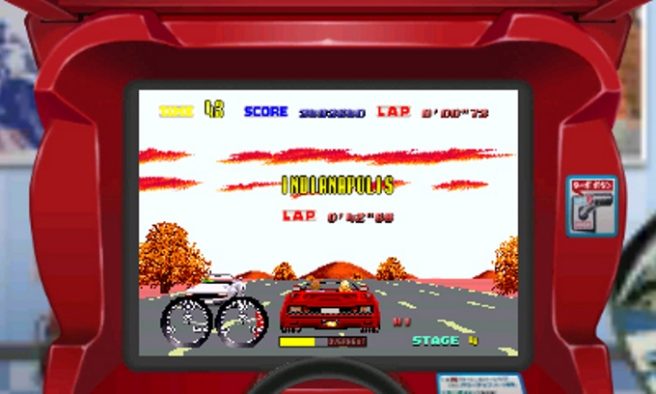 Thunder Force III and Turbo Outrun are both included in the Japanese package SEGA 3D Fukkoku Archives 3: Final Stage. Today, details were shared about what’s new in the two games.

First, here are some screenshots of both:

– Interim Save: Can instantly save the game state anytime
– Interim Load: Loads the above interim save
– Replay: Records own gameplay for later viewing; replays can be fast forwarded
– KIDS Mode: Lowers difficulty with features like retaining weapons and claw and respawning with shield on death; doubles attack power

When it comes to sound, other than volume, it is also possible to choose the Balance Sample between Mega Drive and Mega Drive 2 modes. Also, there’s a Screen Mode with two options: “Normal” and “Classic”. Classic re-enacts the convexity of CRT monitors.

– Interim Save: Can instantly save the game state anytime
– Interim Load: Loads the above interim save
– Replay: Records own gameplay for later viewing. Replays can be fast forwarded

You can also choose between the Japanese and international versions. The only difference here is the messages shown; courses and difficulty level are exactly the same.

Other new features include:

– Select Function: After each four stages, it will be possible to freely change the three part upgrades
– Difficulty: Choose from five difficulty level stars; this feature is new and did not exist in original version
– Time Limit: Choose from five time levels
– BGM Version: Choose from 2 BGM order types; TYPE 1 starts with Shake the Street, TYPE 2 starts with Rush a Difficulty
– Gear Type: Choose between Switch (tapping the Gear Change button will switch between High and Low) and Hold (press and hold Gear Change for Low, release for High) types
– Screen Size: Choose between Normal (4:3, same as the original), Wide (Screen stretched to fit with 3DS’ upper screen), Full (Fills the entire upper screen), or Reduced (To give the situation of playing in arcades)
– Cabinet Type: Cockpit re-enacts the red cabinet most common in Japan. Deluxe is a white cabinet, the same as the first Out Run. Upright is playing while standing. Ugockpit (Moving Cockpit) is same cabinet as Cockpit but will move based on steer movement like Deluxe.

Sound features are as follows:

– Equalizer: Process the sounds played from the game
– Environment Sounds: If set to “On”, it will play various sounds from other game cabinets, to give the feel of playing in arcades
– Engine Volume: The volume for engine sound can be set in three levels
– BGM Test: Can listen to the in-game music anytime