[Let’s Talk] Did you pick up the Switch OLED? 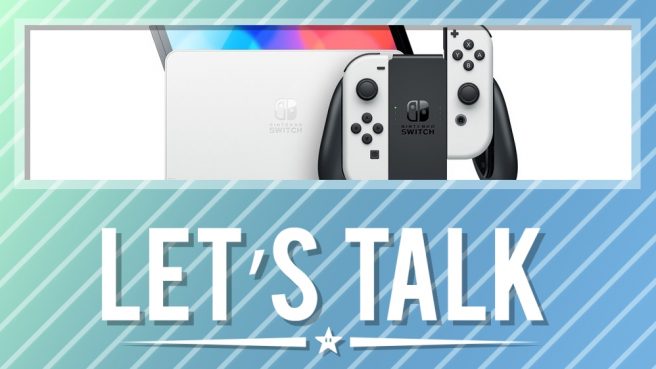 The Switch OLED finally launched around the world yesterday. It’s not quite the “Pro” model that some hoped it would be, but it does have a number of upgrades. The obvious attraction is the new OLED screen that’s a tad bigger. Other than that, it has an updated dock with an ethernet port, new kickstand, 64GB of internal memory, and enhanced audio.

Did you manage to pick up a Switch OLED? If not, are you planning on buying one in the future, or are you happy with your current system? Let us know in the comments below.

Highlights from last week’s topic: What are you playing? – October 2021

I recently have been playing a game on PC called Medieval Dynasty that came out of early access late last month. I also played through several metroidvania games: Symphony of the Night, Super Metroid, Fusion, Zero Mission, Hollow Knight and Chasm. Also recently beat Blue Reflection, Luigi’s Mansion 3. All in the past month and a half or so. Keeping myself busy lol.

I finally got around to No More Heroes 3 after finishing the first two games. I’m shocked at the low reviews considering how much fun I’m having with it. It has it’s flaws (Low frame rate in the open world, several weird glitches, some unneeded open spaces) but this game is bursting at the seams with creativity. The gameplay is super diverse, the story is full of twists and turns, and the graphics have this really clean/shiny cel shaded look to them. I didn’t expect to like this game looking at the trailers, but it turned out pretty great. Gaming needs more wacky stuff like this.

Besides that, I’ve been playing Cruis’n Blast and Eastward. Cruis’n is exactly what I expected to be. We haven’t had this type of arcade racer in a long time. These days most arcade racing games have a bit of realism to them like Forza Horizon, but this one is just pure insanity and raw fun! Eastward looks and plays great so far, but at the moment I haven’t seen anything out of the ordinary. I’ll keep playing to see if it gets interesting, as this was one of my most highly anticipated games this year.

Came back to Age of Calamity to decide if I get the DLC or not.