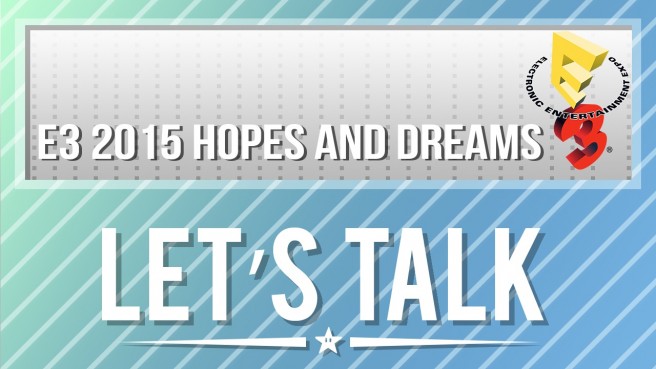 It’s crazy to think about how, in a week from today, E3 will be finished. The Nintendo World Championships will be over and done with, all announcements will have been made, and the expo itself will go on hiatus until next year.

Nintendo had an excellent E3 last year. It’ll be tough to top what they showed in terms of pure news and announcements, but there’s a heck of a lot to look forward to.

I think it goes without saying that the Nintendo Digital Event is the big thing here. We’ll be seeing more of previously-announced titles, along with new games for this year and 2016. Mario Maker, Devil’s Third, Xenoblade Chronicles X, Hyrule Warriors 3DS, Star Fox Wii U, and plenty more should be on display.

With all of that on mind, what are you hoping to see at E3 next week? Is there a game you’d like to see announced? Which already-announced title are you interested in seeing more of? Really, any E3 related talk is suitable for this week’s Let’s Talk topic!

There’s one game I’d like to see above all else right now: Metroid. The series feels like it’s been dormant for much too long (only five years, but still!).

I’d prefer to see a 3D Metroid – specifically a new Metroid Prime – though I’d gladly take a new 2D entry as well. As long as we see something Metroid-related at E3, I’ll be happy!

Highlights from last week’s topic: How are you liking Splatoon?

Pros
So far, the overall game is great. Have not tried single player. The art style/design and concept is cool and is a fresh take on the shooter genre, with Turf wars being more about covering area in paint (less attacking other players, a relaxing experience), and ranked battles primarily focused on attacking other players so that the Zones can be painted (a tense, potentially frustrating experience). Love the new IP.

Weapon and gear selection is plentiful and diverse, and will keep people occupied for a long while.

Easy to level up and get money as you obtain that from any online play (better than grinding as compared to SSB for custom moves [mainly an issue bc the grind is for single player, when the core gameplay/game_time is multi. Mini-rant end]), but maybe too easy. Could’ve made it longer and I don’t think people would’ve minded, I’ve unlocked all weapons, but have not bought/used them all to prevent clutter to my weapon screen. I have 200k money, which is probably enough to unlock everything left in the game since most items are pretty inexpensive.

Cons
-Could use more online stages, the more the better, potentially more than they have planned (planned 2-3 more?).
-ranked battle rank point system adds to frustration of the mode, way too easy to lose points, and is frustrating if you feel you’ve lost due to the ‘randomness’ of stage_selection/team_ selection/team’s_weapon_loadout. Because of point system, people will probably get stuck in the C range and B- ranks, so matching with similar ranked people can still give you wide ranges in skill levels. The tendency I find in ranked matches is that I either play people who completely destroy me and my team, or vice versa.
-not sure about the weapon balance at times, some of the people who are really good at long range or high power splatterguns are really hard to take down.
-hours of play wears on the wrists due to gamepad weight, may need to be careful of that as the game is addicting. A con as they could add other controller options (as far as I know, single player cannot do wiiU Pro controller).
-could use more pre-set message options other than “c’mon” and “booyah”

Recommendations
-ability to create and save/load multiple custom gear/weapon loadouts (help sort through the clutter once a lot of items are collected)
-ability to change equipment while in waiting lobby (or use different saved loadout, per above)
-Paintbrush may need a buff in attack, and an easier way to attack as opposed to mashing ZR (maybe 2 swipes per ZR press). Feels a bit weird when most other attacks are holding ZR or pressing it once.
~ability to exit lobby (maybe, keeping it does help with arranging matches, I imagine)
~ability to sell gear (essentially, reset abilities, or prevent less/no use ones from cluttering menu)

I’m really enjoying it despite the fact that I never warmed up to any other online shooter. It’s amazingly fresh (…) and a lot of fun! Also, knowing Nintendo any content shortages will probably be temporary.

Multiplayer is a lot of fun too, but i do think its still a bit light on modes and options at the moment.

I cant wait to see whats in store for splatoon the next couple of months, and ill definitely be playing the game for a long time if they keep supporting it the way they have!