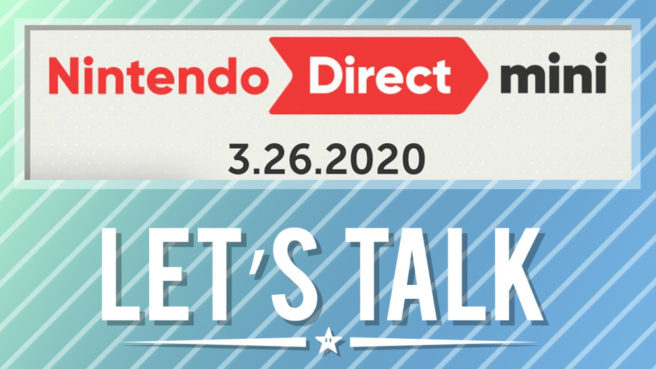 Rumors of a possible Nintendo Direct circulated earlier this month. The speculation came to a head this week, as Nintendo finally aired a new presentation this past Thursday. It may have been a “Mini” presentation, but when it’s been more than half a year without a general Nintendo Direct, you’ll take what you can get.

Given everything we saw in the Nintendo Direct (Mini), how’d you feel about the presentation? What was your personal highlight? And if you aren’t planning on purchase Xenoblade Chronicles: Definitive Edition, what’s wrong with you? Sorry, I had to. In any case, share your thoughts with us in the comments below.

I’ve been really enjoying my time with the game so far. I adore both of my island’s animal inhabitants and the QoL changes have been very welcome additions. I can tell that the developers made the most of the extra time and really put their all into it. I feel like I’m making money a bit faster than in the past starting out, but that could be just from me having more free time right now compared to when New Leaf came out. The breaking tools thing isn’t as annoying as I was afraid it could be. It feels like even the flimsy tools are more durable than the weapons in Breath of the Wild and are easy enough to replace to not really be a problem. I look forward to seeing how my little island grows over the next year and beyond.